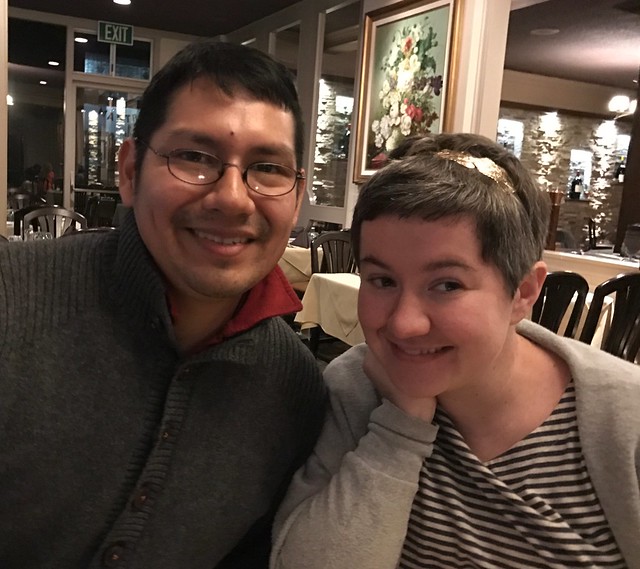 With Morgan in California for the week, we decided to make a quick trip to Carmel. We left Carmichael about 10:05 am. Waze routed us through San Jose (80 to 680 to 101). With one short stop in Milpitas, we rolled into Carmel about 1:45 pm. The traffic was very heavy from Seaside to Carmel. We tried to find a parking spot around the downtown, but gave up and headed to the hotel.

We are spending one night at the La Playa Hotel; more on the hotel tomorrow. We checked in, parked the car and walked back to Grasings for a snack.

The hotel eventually called and said that our room was ready. We walked back to the hotel. After unloading the car, we headed down to the bar to watch the sunset on the ocean.

The plan for the evening was to meet Morgan and her boyfriend David for dinner. The logistics got a little complicated. After some discussion, I ended up deciding that I would send an Uber to pick them up in the Carmel Valley and bring to the restaurant. I didn't even know that you got send a car to somewhere other than where you were...

Sharon and I walked from the hotel to Anton & Michel The Uber got Morgan and David there about 10 minutes later.

We had a nice dinner and visit. Sharon had rack of lamb and I had short ribs. I think that Morgan had the duck.

After dinner, I loaded the kids back in an Uber and sent them back to the Carmel Valley. Although I have used Uber a number of times, I never really thought about this scenario. I am amazed how easy it was to pull off.

Sharon and I walked back to the hotel down Ocean Avenue. Sharon window shopped as we went along. She lamented that we have to head back so early in the morning.

Email ThisBlogThis!Share to TwitterShare to FacebookShare to Pinterest
Labels: Dining Out