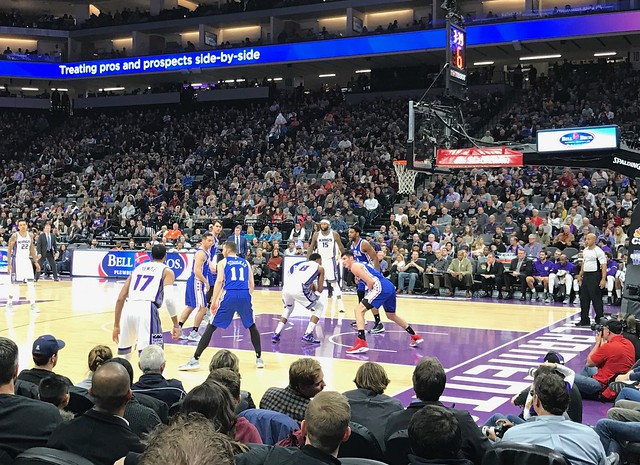 Sharon, Jack and I went to see the Sacramento Kings play the Philadelphia 76ers NBA Basketball game. With Jack home for Christmas, I got some very nice seats [Section 118, Row CCC, Seats 1 to 3]. In a close game, Cousins hit a three point shot with 20 seconds left in the game and the Kings held on to win by the score of 102 to 100.

It turned out to be a fairly social evening. Before the game, we met the Sanborns and Sharon's nephews Kevin and Eric in the Sierra Nevada bar on the second level. We ran into Hunter and Yuli at half-time. After the game, we ran into Alan and David Laskin. David and Jack were classmate from kindergarten through high school at SEAS and Jesuit. 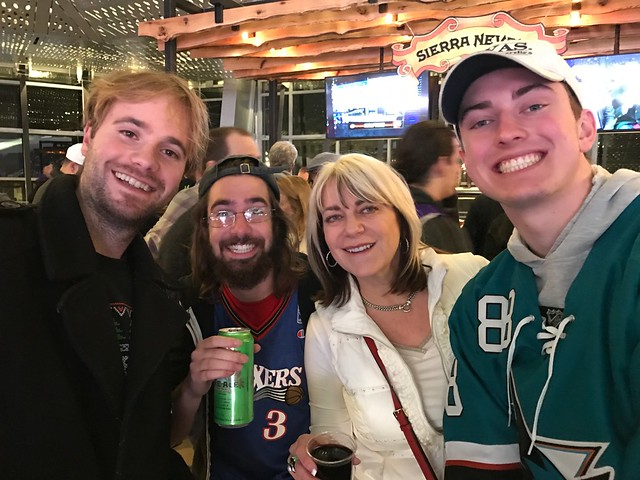 DeMarcus Cousins led the Kings with 30 points on 10 from 20 from the field, 2 for 4 from three and 8 for 9 from the free throw line. In his first game back after sitting out two weeks with a hip injury, Rudy Gay added 17 points. I was shocked at how big Gay looks; he is listed at 6' 8'' and 230 pounds. While I have seen Gay play lots of times before, I haven't seen him play from this close.

In only 29 minutes, Joel Embiid led the 76ers with 25 points on 8 for 17 from the field, 1 for 4 from three and 8 for 9 from the free throw line. Embiid's playing time continues to be limited as he works his way back into shape after missing two seasons with foot injuries. Embiid looked very good...

The Kings have 2 wins and 2 losses in games that I have seen this season. With the Kings in the Western Conference eighth playoff spot, the next couple of weeks will be interesting.
By Heringer at 12/26/2016 11:59:00 PM