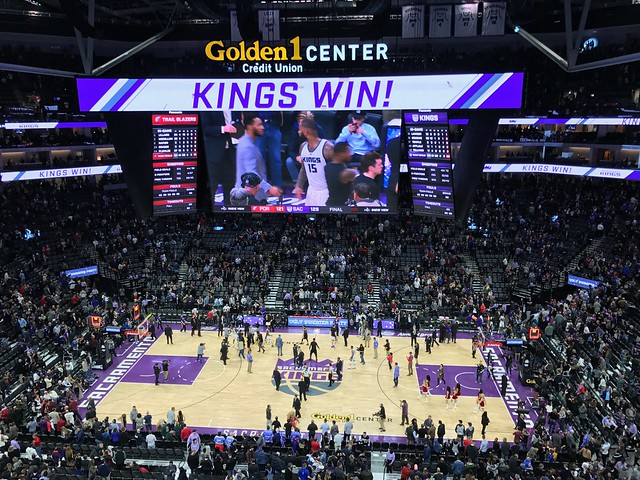 I went to the Sacramento Kings versus Portland Trail Blazers NBA basketball game with Snipes. Trailing by about 10 points for most of the game, the Kings took the lead at the 8:45 mark of the fourth quarter and held on to win by the score of 126 to 121. It was a fun game to watch.

The high scorers for the Trail Blazers were C.J. McCollum with 36, Damain Lillard with 24 and Mason Plumlee with a career high 27 points. Lillard added 15 assists.

The officiating was horrible. They were calling a lot of ticky-tacky fouls. At the end of the game, the refs called a second technical foul on Cousins and ejected him from the game. He ran off the court into the locker room. The refs then rescinded the technical foul. I have never seen this happen... Someone had to go get Cousins out of the locker room.

While I love the new arena's location, I haven't been happy with the upper deck seating. We sat in Kurt's seats in the front row of the upper deck. I literally couldn't move legs.