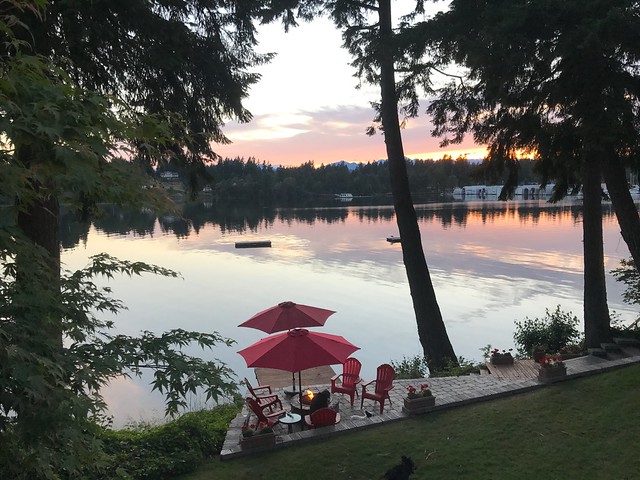 Sharon slept really late. Given how late she slept, I regretted not going for an early run.

Jill went out and got pastries from the Saboteur Bakery in Bremerton. When we were having lunch at Sitka & Spruce on Friday, the waiter raved about the bakery. Eventually, we had scrambled eggs and pastries for breakfast. The pastries were excellent!

We debated going for a hike and finally settled on driving up to Poulsbo. As a reminder of the city's early Scandinavian immigrants, downtown Poulsbo maintains a Scandinavian theme. Wallen and I hunted for an open brewery, while Jill and Sharon shopped. We ended up at Tizley's EuroPub.

The four of us met for lunch at The Loft. We had a great table on the deck in the sun. Although the original forecast for Saturday was rain, we had some very nice weather.

Back at the Wallen's, Sharon and I actually ending up taking a short nap... About time we got up, Becky showed up. She came for dinner and was planning to spend the night. Becky brought a dog that she was keeping for the week, a small lap dog named Maddy.

With Becky and Tal's wedding date set in the last week, there was a lot of planning going on over the weekend for the wedding. They are getting married in Kona in February 2018.

At this point, the fun began. With Nate and Sam heading out of town for the week, the Wallens were committed to keep their three dogs. Wallen, Sharon and I went over in the afternoon to pick them up. Nate and Sam have a large mixed breed german shepherd (Sadie), a medium sized australian shepherd (rocko) and an eight month old english bulldog. Bringing them back to the house, the dogs were pretty amped up. The four dogs and a cat were bouncing around the house and yard.

We finished the day with a late dinner of barbecued salmon, potatoes and asparagus. We spent lots of time around the fire pit watching the very late sunset. 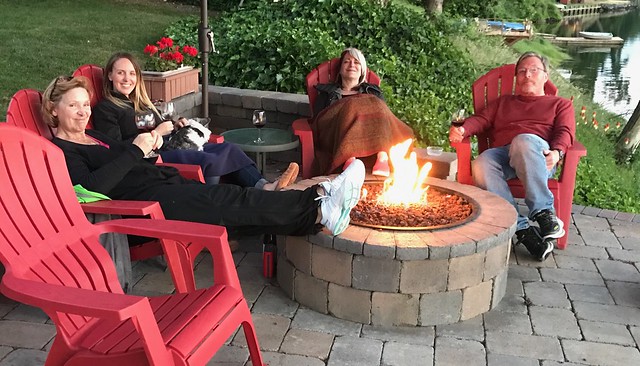