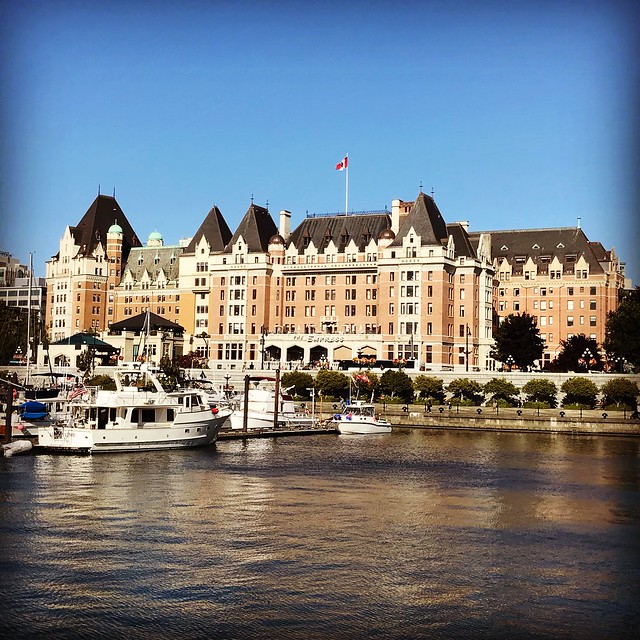 Up early, Sharon and I left the house at about 5:20 am. Our Southwest flight from Sacramento to Seattle was originally scheduled for 7:05 am, but was delayed about 30 minutes. Boarding with A29, I was able to get the middle and window in the nice exit row of an older 737. I sat in the middle and Sharon sat on the window. The flight was on the ground in Seattle just before 9:30 am.

Unfortunately, when I booked the flights, I made a large tactical error. Our flight from Seattle to Victoria was on Alaskan. As a result, we had to exit the concourse, get our bags and recheck our bags. The bags came very quickly, but the line to check the luggage was a mess! I was not happy...

When we checked our bags at Alaskan, they didn't have our TSA Pre numbers. Walking to the regular security line, I lost my patience. I looked like it was going to take an hour to get through security. I ended up turning us around and signing us up for CLEAR. Sharon was very confused about what we were doing until I explained it to her later.

Originally, we thought that we would have time for a leisurely breakfast. We ended up at the gate about 30 minutes before the flight boarded. We bought a couple of grab and go things to eat.

We caught a 11:45 am Alaskan flight from Seattle to Victoria. It was a short 45 minute flight. After getting the luggage and making our way through immigration, we picked up a Hertz rental and headed into downtown Victoria. We are spending two nights at the Fairmont Empress.

We checked in about 2:00 pm, but the room wasn't ready. We checked our bags and had a glass of wine in the Lobby Bar. Sharon made reservations for Tea at 3:15 pm. It is something that she has wanted to do for years. I was dubious, but the experience exceeded my expectations. The hotel texted me the room number while we were eating.

After getting settled in the room, we walked around exploring the area. We wandered up Wharf Street checking out the Flying Otter, Red Fish Blue Fish and CANOE. Sharon was focused on finding a place to have fish and chips. We ended up having a beer at the Swan Brewery & Pub. One of the waitresses recommended Ten Acres for fish and chips.

Heading back down Government Street, we stopped at the Bodega Bar for a glass of Spanish wine. We finished the night with a late dinner at the Ten Acres Bistro. We both had FISH + CHIPS [Hoyne Dark Matter beer battered - fries - coleslaw - tartar sauce]. Sharon was underwhelmed...
By Heringer at 8/01/2018 11:59:00 PM