Everyone slept fairly late. Eventually, Barb made eggs and bacon for breakfast. After breakfast, we headed to the Nanaimo Hornets Rugby Clubhouse. I was surprised how nice the clubhouse and the field were. More on the rugby club in a future post.

Back at the house, Sharon and I packed up. Our plan for the day was wine tasting. During dinner the first two nights in Victoria, I was surprised at the number of British Columbia wines on the menu. At dinner on Saturday night, Geselbracht said something about Trip Advisor. While we were eating breakfast, I looked up the Trip Advisor list of the top 15 wineries on the island. The top two were on our way to the airport. 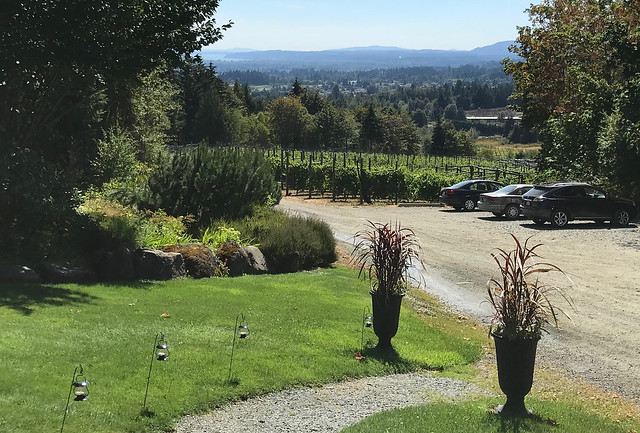 We rolled from the house a little before 11:00 am. The first stop was the Averill Creek Winery. Although the tasting room had a marvelous view, this stop was a bust. The person serving the wine was horrible and rushed us through the tasting. Although it was hard to judge some of the wines due to the small size of the pour, I enjoyed the wines more than Sharon did. The winery didn't charge for the tasting. 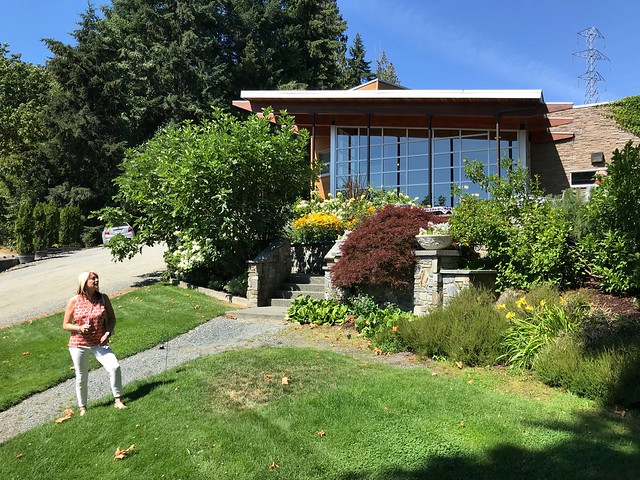 The next stop was the Enrico Winery. This turned out to be an excellent stop. We sat outside. The staff was very good. Both Sharon and I enjoyed the wines.

Continuing south, we stopped for a late lunch at the Malahat Chalet. The restaurant had a great view. Both Sharon and I had bison burgers.

From there, we continued to the airport. We caught an Alaskan flight from Victoria to Seattle. Scheduled to leave at 5:05 pm, it took off a little more than half an hour late.

At Seattle, we went through immigration and then collected our bags and went through customs. They have introduced a kiosk before immigration that we had never experienced before. We dropped our bags at Southwest. Unlike Wednesday at the Alaskan counter, the Southwest counter was oddly empty... We breezed through security with TSA Pre and CLEAR.

We caught a 8:30 pm flight from Seattle to Sacramento. Boarding with A20, I was able to get the two seat exit row for us. By the time, we caught to baggage claim, our bags were there. Except for the crowd to catch the train to the terminal, I don't know that we have ever gotten to our car that quickly! We were home at 11:00 pm. It was a great trip. I am going to post a couple of general observations later this week.
By Heringer at 8/05/2018 11:59:00 PM