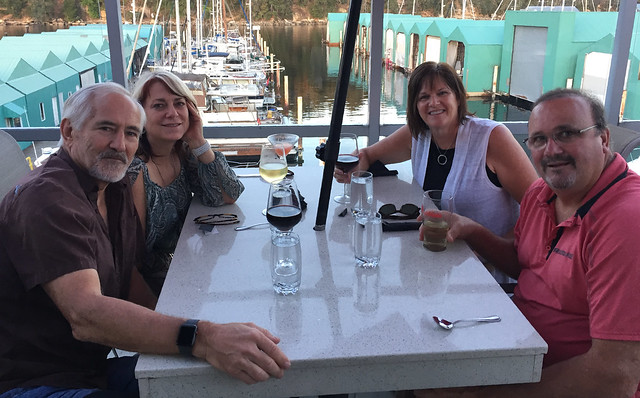 We had a light breakfast with Geselbracht and Barb at their house. Afterwards, we headed out to explore the area.

The first stop was a subdivision that Geselbracht built when he first moved to Vancouver Island in the early 2000's. We drove through the subdivision and then walked along the beach in front of the four waterfront lots. 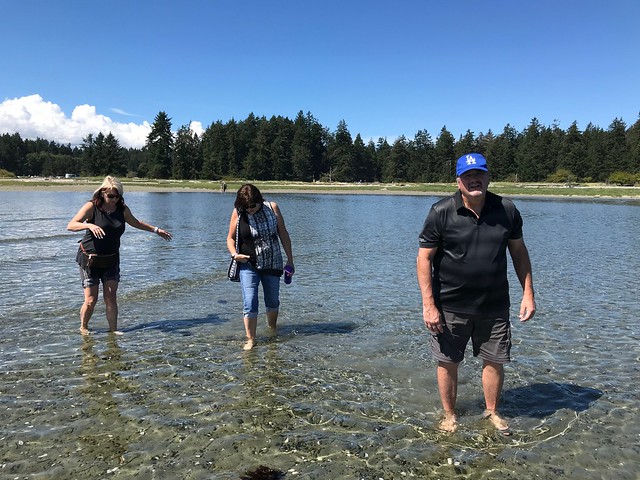 From there, we headed to Rathtrevor Beach Park. We wandered out into the shallow bay. At low tide, the ocean recedes almost a kilometer.

We headed to lunch at Coombs. The market's claim to fame is goats grazing on a sod roof.

Geselbracht built a house in Lanceville about 2005. He sold it two years ago with designs on building a new house on a lot with a view. The development of that neighborhood has lagged, but Geselbracht is hopeful that he will be able to start working on the property late this year. We drove up to the new neighborhood and hiked out to the lot. The view from the new lot is fantastic, but I am still confused about how he is going to build on it. The house will sit on top of a giant rock! I would love to see some pictures of the construction progress. I am motivated to come back and see the house when it is completed.

After a short break back at the house, we headed to the Nanaimo Waterfront. We walked the length of the waterfront and then continued to a late dinner at Beachfires Pacific Grill. Sharon and I split an order of Crispy Fanny Bay Oysters [Tossed in house made cornmeal batter and fried to perfection served with a Cajun cream sauce topped with goat cheese and balsamic reduction] as an appetizer. We both had Pacific Grill Salmon [Seasoned with a soya maple chili glaze and grilled to perfection]. It was NOT grilled to perfection; Sharon was very disappointed that it was overdone...