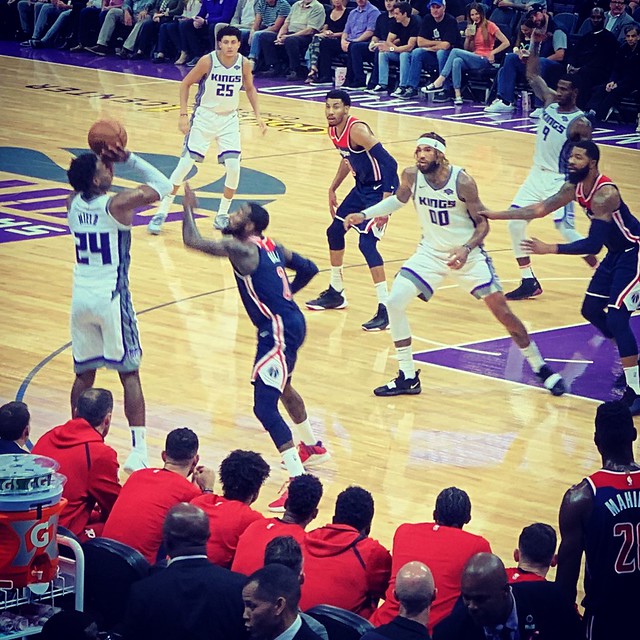 Sharon and I went to the Sacramento Kings versus Washington Wizards NBA Basketball game at Golden 1 Center. We met the Sanborns for dinner at Foundation Restaurant and Bar before the game. Larkin and I had dinner at this restaurant before a game at the end of the Kings first season downtown. Sharon had a steak salad, while I had a chopped Italian salad.

The Wizards, who led by six going into the fourth quarter, committed three turnovers in the final 24 seconds. The Kings won the game by the score of 116 to 112.

The high scorer for the Kings was Nemanja Bjelica. He had 26 points on 9 for 16 from the field, 6 for 10 from three and 2 for 3 from the free throw line. Bjelica also had 12 rebounds. I am not clear where they got Bjelica... The Kings got nice contributions from Fox, Hield and Cauley-Stein.

The Wizards' high scorer was John Wall. He had 26 points on 9 for 20 from the field, 1 for 6 from three and 7 for 8 from the free throw line. Wall added 8 assists. I was shocked how much bigger Wall looked than Fox. Although Wall is only list as an inch taller, he is 35 pounds heavier.

At the half-time, the Kings invited us downstairs to a VIP lounge in an attempt to sell season tickets. I ended up talking to an Accenture consultant and a Kings salesperson. I am somewhat interested in trying to get a loft for one of the games this year.

I always have a hard time focusing on the game when I am with Sharon. It is more of a date night.