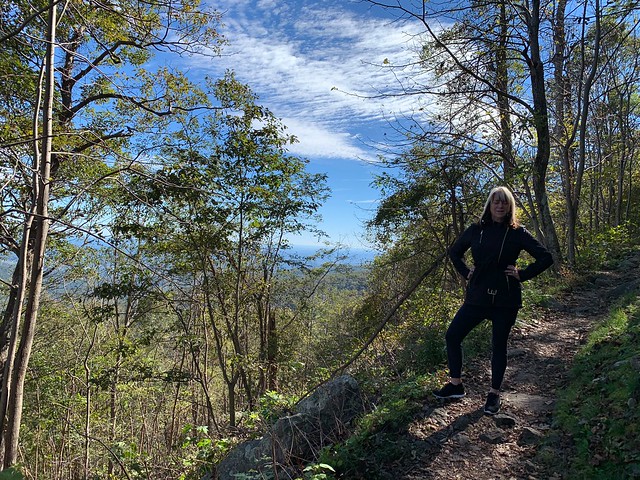 We have had several lazy mornings on this trip. By the time we wandered over for breakfast in the inn, it was after 9:00 am. We had the breakfast that came with the room and spilt a pear and goat cheese omelet.

We got to the trail head about 11:30 am. Sharon hadn't brought her hiking poles or heavy shoes. We ended up hiking about 2 1/4 miles in an hour and twenty minutes. A map of the hike is here. We didn't make it to Mary's Rock... Leaving the park, we made a stop at the Pinnacles Overlook.

Heading back to Washington DC, we made a stop at the Grey Ghost Vineyards. We tasted a few wines, bought two glasses and wandered upstairs to have some crackers and cheese. We were much more impressed with the wines than we were in '11... We also bought a bottle of wine to take to the Nooters.

We rolled back into Georgetown about 4 pm. I dropped Sharon at the Georgetown Inn. We are spending two nights there. In the past, we have always stayed at the Georgetown Marriott, but Sharon convinced me to stay here this time because it is so much closer.

I looped back in Rosslyn, fueled up the rental car and then dropped it back at the Key Bridge Marriott. This included more than a little bit of drama with several people waiting for rental cars at the tiny Hertz office. I walked back to the Georgetown Inn to catch up with Sharon.

We eventually wandered to Cafe Milano for a drink and to meet Jack. Sharon and Jack had dinner there in July. From there, we headed to il Canale. Jack and I had lunch there when we were doing the college tours in 2015. Sharon and I spilt spaghetti and meatballs, while Jack had gnocchi. Although the night started with everyone more than a little stressed, everyone was relaxed by the end of dinner.