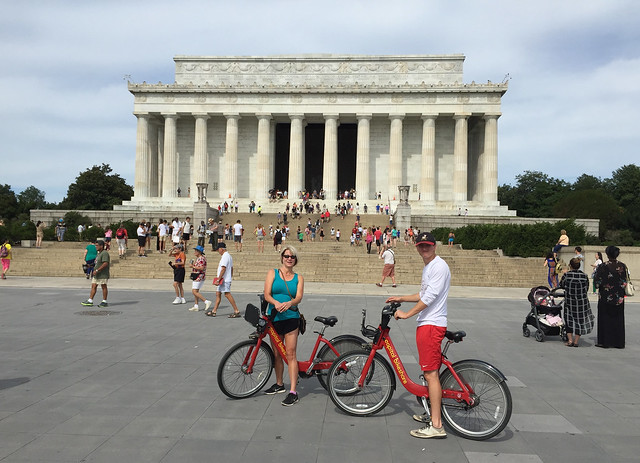 Wandering into Georgetown, we had breakfast at the Daily Grill.

After breakfast, we got Capitol Bikeshare bikes and rode along the Potomac River to the Lincoln Memorial. My priority for the morning was the Martin Lurther King Memorial. Jack and I had ridden by MLK Memorial just before it opened. From the Lincoln Memorial, we rode to the MLK Memorial, walked through the FDR Memorial (one of Jack's favorites) and continued to the Jefferson Memorial. After getting some waters and a gatorade, we rode back along the tide pool and across to the Washington Monument before heading back to the hotel. We probably covered 6 or 7 miles in a little over two hours.

Once we got back to the hotel, I did a walk about through the neighborhood and down to the waterfront. I toured the Old Stone House.

Sharon eventually had a hamburger in the bar. While she got ready, Jack and I had a pizza at Il Canale.

Shortly after Sharon caught a cab to see Mary Maloney, Barb dropped Nooter off at the hotel. Nooter and I spent a couple of hours on the roof of the hotel catching up. It was great to see him. Barb picked him up about 6:15 pm just before Mary and Sharon showed up.