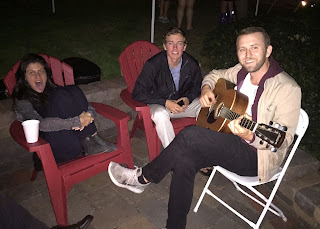 Sharon, Jack and I got a 11:55 am Alaskan flight from Sacramento to SeaTac. We will be spending the weekend in Bremerton for Nate Wallen's wedding. Although we didn't connect with them, Snipes, Joy, Tomasin, Julie, Hunter and Yuli were all on various flights that landed at SeaTac around the same time.

On the ground about 1:35 pm, we grabbed our luggage and caught the shuttle to the rental car terminal. Heading to the Tacoma Narrows Bridge, the fun began. There was a car fire on I-5 just before the turnoff to the bridge and then a car in the median on Highway 16 near Gig Harbor. The world is a parking lot... As a result, it was about 4:15 pm by the time we got to the room. We are spending two nights at the Fairfield Inn in Bremerton.

About 6:30 pm, we headed to the Wallens. They hosted a fairly big crowd for a rehearsal dinner. Although it was raining lightly, the Wallens had tents set up in their backyard. Jack and I went out and picked up Drew and Nicki at some point in the evening. They had taken an airporter from SeaTac to Bremerton. It was a nice evening; lots of Wallens, friends of Nate and Sam and others from out of town.

Although they were originally planning to stay at the Wallens, Drew and Nicki ended up going back to the hotel with us. Luckily, I had gotten a large two bedroom suite for the weekend; it had a enough room for the five of us.