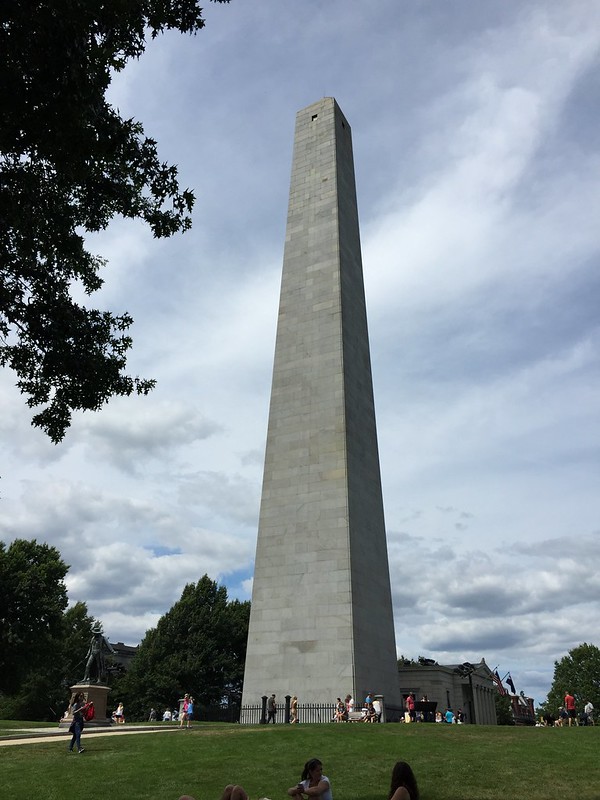 While Jack watched Tottenham play the first game of the Premier League Season, Sharon and I walked to Starbucks for some breakfast. The plan for the day was to walk the Freedom Trail in downtown Boston.

From the hotel, we walked up to the Visitor Center in the Boston Commons. The trail is actually marked on the sidewalk. We made a number of stops including: Massachusetts State House; Shaw Memorial; Granary Burying Ground; King's Chapel; Ben Franklin Statue; Old Corner Book Store; Faneuil Hall; Paul Revere House; Old North Church; and, Bunker Hill.

At Bunker Hill, Jack and I climbed 300 steps to the top of the monument. From there, we walked back to the hotel. My Withings iPhone app showed that we walked 23,400 steps and 11.2 miles.

Once we got back to the hotel, I took off to explore the wharf and then headed to the Quincy Market. Sharon eventually caught up with me at a restaurant called Cheers.

We finished the night with a late dinner at Strega Ristorante. I had one of the specials: Zuppa di Mare. It was very good. In fact, I was so focused on my dinner that I have not idea what Sharon or Jack had for dinner. Afterwards, we stopped along Hannover Street for some gelato.
By Heringer at 8/08/2015 11:59:00 PM