Larkin and I played in the Quest Tech golf tournament at the Granite Bay Golf Course. The tournament was a scramble format. We played with Joe [SAFE Credit Union] and Joshua [Palo Alto Networks].

After feeling good on the the driving range, I struggled all day. It is probably the worst that I have ever hit a golf ball. I always feel like I have a hard time getting a consistent rhythm in a scramble tournament, but this has to be the worst I have ever done.

We ended up using three of my drives, including over the water on the first hole. Unable to card a birdie, the group was five over. 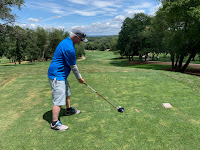 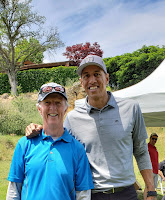 As we were standing on the 16th tee, a ball landed over our carts. It turns out it was Doug Christie's ball. He came over to apologize. Larkin got a picture with him. I have a picture with Doug Christie and his wife from a Quest Event fifteen years ago...
By Heringer at 5/20/2019 11:59:00 PM

Email ThisBlogThis!Share to TwitterShare to FacebookShare to Pinterest
Labels: Christie's