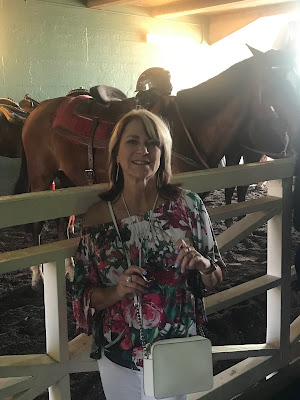 Spending the day in Southern California, Sharon and Mary Maloney headed to the Santa Anita Race Track to watch the Kentucky Derby. For the first time in the 145 year history of the race, the winner was disqualified for an in-race foul. The stewards disqualified Maximum Security from first place for drifting into the path of War of Will, who in turn had to alter course and affected several other horses.

I watched the race at the start of my treadmill workout, but switched away after the race was over. I didn't realize until several hours later that Maximum Security had been disqualified...

I finished the day watching the Golden State Warriors versus Houston Rockets NBA Western Conference second round play-off game. The Rockets beat the Warriors by the score of 126 to 121 in overtime. It was an entertaining fourth quarter and overtime. Kevin Durant has 46 points for the Warriors, while James Harden had 41 for the Rockets. It is amazing to watch Durant essentially be the point guard and run the offense. Steph Curry and Klay Thompson both struggled, including Curry missing on a wide-open dunk towards the end of the overtime.