I never thought that Jimmer would be an NBA player... Fredette was drafted 11th in 2011. It is particularly discouraging to look at who was drafted after him in the same draft: Klay Thompson was drafted 12th; Kawhi Leonard was selected15th, and; Jimmy Butler was taken 30th.

Sacbee.com: Fredette’s NBA dreams started and ended in Sac: ‘No one is more frustrated than Jimmer’ - July 10, 2019 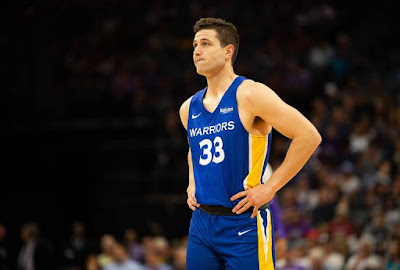 Jimmer Fredette’s NBA hopes and dreams started here eight years ago amid much promise and hype.

And they ended in Sacramento last week, in the Warriors’ locker room in Golden 1 Center, in a city that once embraced him and then wondered whatever happened to Jimmermania.

Fredette was a sure thing who suddenly wasn’t for this fact alone: His prodigious skill set that played out at BYU – a dizzying amount of big shots and 30-point games – did not translate to the NBA.

He was effortless at work in college, but in the NBA, Fredette had to work for everything. This included getting his shot off against defenders longer and quicker. And this nagging question: Was he a point guard or shooting guard?

At 30, Fredette’s work ethic never changed, though his team colors and employers often did. He remained a good teammate, hard working, eager to improve. But you cannot teach quickness and defense, and the NBA affords little opportunity and time for development for journeyman veterans.

When Fredette signed with Golden State’s summer league program in June, he beamed when meeting with the media. His last hurrah in the NBA was a chance to show he belonged.

Fredette said days before the Kings hosted the California Classic, “I believe I’m an NBA player. I believe I can do really great things and be able to help a team in some way. I wanted to give that one more opportunity and be with my family and be able to live here (in the United States). We’ll see what happens.”

What happened was a sobering dose of hoops reality with a reroute back overseas to continue his career. Fredette this week signed with Greek team Panathinaikos of the EuroLeague on a two-year deal.

Fredettte was just a face in the crowd, another roster number in the mix of the four teams at the California Classic, each player eager to catch the right eye. Fredette understood that he had to excel against players much younger and a great deal less heralded.

Fredette averaged 9.5 points on 44 percent shooting in just over 20 minutes of action in two games. He also earned the first technical foul of his American playing career.

I caught up to Fredette in the labyrinth of hallways by the Golden 1 locker rooms, moments after he informed his coaches he was leaving the team, signaling the end of his NBA career. He has since returned to his family home in Denver, with wife Whitney and two young children.

“I’m good,” he said. He was good in appearance, the sure smile and firm hand shake, but inside, Fredette was unsettled. He was informed by coaches that he likely would not have made the Warriors final roster, so he elected to alter course.

Fielding offers from pro teams across the globe, Fredette elected to step aside and not risk injury. This wasn’t quitting as much as it was an effort to find a better fit while allowing someone else his game minutes while the Warriors competed in the Las Vegas Summer League.

It was his final NBA assist.

“I wish him well,” Warriors summer league coach Aaron Miles said. “I wasn’t sure exactly what was going on with him. But I definitely know he has a lot of basketball left in him.”

The coach added, “He still can play. I think he should still play. I should say this – I think he should do whatever he feels is best for him and his family. I know a lot of times as you get older, sometimes it’s more mental than physical. But I don’t know his situation. I don’t know what the reasoning behind it. But he definitely has a lot of basketball left.”

Fredette had Kings fans in 2011 as excited as any rookie in franchise history. He was the No. 10 pick in the draft, by Milwaukee, and quickly acquired by the Kings. His jersey No. 7 was a hot seller.

Kings merchandise sales spiked some 500 percent over a one-year span with three-quarters of the increase tied to Fredette, according to national consumer reports in 2011. Sacramento merchandise outlets regularly sold out of No. 7 garb during his first months with the club.

The Maloofs, who owned the Kings then, were certain they had their next star. But Fredette never again found his basketball groove on American soil.

He bounced from the Kings to the Bulls, Pelicans and Knicks, then had a stint with the NBA’s G-League in New York. He found his game in China over three seasons with the Shanghai Sharks, averaging more than 37 points a game, including 75 in one. He averaged 6.0 points a game in 241 career NBA tilts, including a brief stint late last season when he was signed by Phoenix.

Fredette has long maintained that his family, including parents in New York, his immediate family and his Mormon faith have kept things in proper perspective. Basketball is a game, not real life. But he also uses basketball to make a living.

“He’s still the same guy, hasn’t changed and still wants to compete,” said Greg St. Jean, the former Kings assistant player development coach who got to know Fredette well. They remain in contact and spoke often throughout the California Classic.

“No one is more frustrated than Jimmer,” St. Jean added. “He’ll find his place somewhere. I think if he was coming out of BYU now, he’d still be a high draft pick.”

Fredette was known as “The Lonely Master” during his China stay, which he said was a “double meaning.”

“Lonely in Chinese is ‘Jimmo,’ but it sounds like Jimmer,” Fredette said after first signing with the Warriors. “So to say my name means lonely. It means you’re on the top of the mountain and no one can reach your level.”

Family, faith and hoops still define Fredette, said someone who knows the man as well as anyone.

“I’m so proud of Jimmer on and off the court,” Fredette’s mother, Kay, said from upstate New York. “He was a joy to raise because he seemed to just want to mind his own business, play sports, support his family and friends and live life as a good person who was kind to everyone.

“He is still the same even after all the accolades and attention. He works so hard, every day, trying to get better (in basketball). It’s not easy to do what he does. That’s the life he has chosen for himself and his family.”

She added, “He’s the same. I watched him at some basketball camps we had in Utah (recently) and he took the time to acknowledge every single last fan in the gym. That’s why they love him. He knows he’s not any better than anyone else.

“He’s just a kid, now a young man, who happened to hit in big in basketball. That’s it. He knows what life is really all about.”

Fredette’s career has no global boundaries, and good money can be made in the EuroLeague, where Fredette will reportedly be among the highest paid players. There’s always a market somewhere on the globe for players who can score and entertain.

“There’s been a lot of ups and downs throughout my whole career,” Fredette said. “Through the whole thing, you have to stay even keel and push forward. I had a lot of great opportunities in my life to go to a lot of cool places in basketball, be successful and make great money and be able to play the game that I love. It’s been a true blessing for me.”
By Heringer at 8/06/2019 05:00:00 AM