Our neighbor's son qualified for the US Open last year and lost in the first round. He qualified again this year and won this first round match. 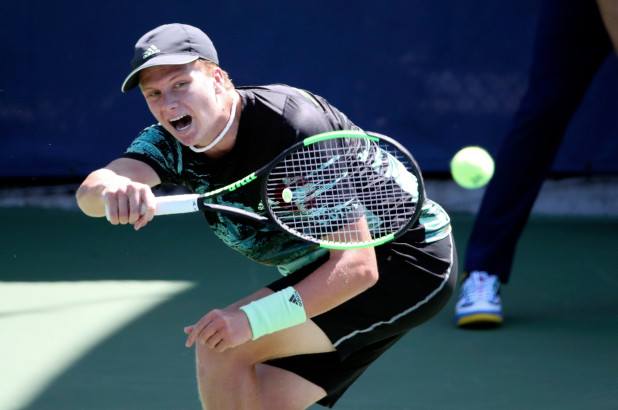 Jenson Brooksby is not making this any easier on himself.

But if he keeps doing what he did Monday, the decision might just be made for him.

The 18-year-old American captured his first Grand Slam win by beating former Wimbledon finalist Tomas Berdych 6-1, 2-6, 6-4, 6-4 in the first round of the U.S. Open.

By advancing to the second round of the main draw, which he got into by winning three qualifying matches last week, Brooksby is owed $100,000. But he can only accept it if he gives up his scholarship to Baylor, where he is signed to enroll next January, and turns pro.

“It gets tougher the more I win here,” said Brooksby, who added that his decision is still “up in the air.”
Brooksby said he plans on seeing how the rest of the tournament plays out and where his world ranking stands over the next few months before making a final decision. He entered Monday at No. 394.

For now, he is just enjoying the ride.

“It’s amazing,” said Brooksby, who will face No. 17 Nikoloz Basilashvili in the second round. “[Berdych] has been a very good player, obviously, throughout the last decade and more. I’m just very excited to get through today.”

The Sacramento native met Berdych on Court 13, and by the end of the match, it was standing room only at least three rows deep, with fans standing on bleachers from Court 14 to get a peek at the upset. The crowd roared as Brooksby’s final forehand zoomed past the 33-
year-old Berdych to end the match.

“I think the fans like me a lot, which I’m very appreciative for,” Brooksby said. “I love their support.”

Later in the day, the crowd swelled around a different backcourt as another American teenager tried to pull off a win of his own. Zachary Svajda — who, at 16 years old earned a wild card after winning the USTA Boys under-18 national championship — took the first two sets before falling to 37-year-old Italian Paolo Lorenzi 3-6, 6-7, 6-4, 7-6, 6-2. Svajda appeared to be battling leg cramps as the marathon match, lasting 4:20, wore on.

Brooksby, meanwhile, had just finished signing every last autograph by the time the next match on his court began. He then walked through the concourse mostly unrecognized, save for a few fans who stopped him to take a photo. If he gets through another round, the blond-haired kid who wears a broken-shell necklace may not be so anonymous, especially with fans craving to find the next big American tennis player.

“I know that I’m American and they want Americans to do well,” Brooksby said. “I appreciate that they want me to do well.”

Brooksby was here last year, too, as a wild card after winning the USTA Boys’ 18s national championship. He lost to John Millman in straight sets, but came back to Flushing a year later feeling better prepared against Berdych, the former world No. 4 who has battled injuries this year.

“I wasn’t really ready for that stage yet last year because I hadn’t played even [ATP] challengers for the most part,” Brooksby said.

Whether he remains on the big stage or opts for college remains to be seen. Brian Boland, the men’s coach at Baylor, was in attendance Monday to see Brooksby take down Berdych. Another win would give Brooksby the option of earning $163,000 — or slightly less than four years of tuition at Baylor.

“It’s definitely [a] financial [decision],” Brooksby said. “I would get four years of free college if I went just for one semester, compared with the money I earn here. Just gotta figure all that out.”
By Heringer at 8/29/2019 05:00:00 AM