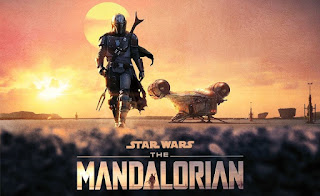 Saturday night, Sharon and I finished season one of the The Mandolarian. Focusing on Downton Abbey, but it has taken us a while to finish the season.

Season one of The Mandalorian premiered on Disney+ on November 12, 2019. It consists of eight episodes.

Set five years after the events of Return of the Jedi (1983) and the fall of the Empire, The Mandalorian follows a lone bounty hunter. He is hired to retrieve "The Child." The Mandalorian has second thoughts about leaving it with the remnants of the fallen Galactic Empire that hired him and goes on the run to protect the infant.

I really enjoyed this series. The reveal that the child is "baby yoda" is very well done. The subsequent folding of baby yoda into the ongoing storyline is masterful. I am looking forward to watching season two.
By Heringer at 11/09/2020 11:59:00 PM