Over the last twenty-two years, I have owned three different treadmills. They have been a large part of my fitness routine.

I bought my first treadmill in the fall of 1999 while we were still living at East View. It lasted until 2006.

In 2006, I purchased a Horizon Fitness T63. I had several different problems with this treadmill. I had to replace some of the electronics in the first year that I had it.

A two-hundred pound person pounding along puts a large stress on a treadmill. In 2010, the running platform split. I took the treadmill apart and replaced the platform and the belt.

In September of 2013, I bought a NordicTrack 2450 treadmill. It has gotten a lot of use, particularly in the last eighteen months. The treadmill is connected to the iFit website. One of the features that I particularly love is that it will play back a workout. I can get on the treadmill and it will automatically increase the speed at set intervals and then decrease the speed as a cool down.

In September of 2017, I had to replace the running platform; it split. I had to take the treadmill almost completely apart and put it back together.

The NordicTrack is pretty beat up at this point. The belt slips as it gets warmed up. Sharon is very uncomfortable with it and won't use it. When Drew and Carmen were here on Sunday, I took the treadmill apart. Drew helped me wrestle the biggest piece downstairs and into the garage.

In the fall of 2018, I got Sharon a Peloton bike as an anniversary present. I have been extremely pleased with the bike and the quality of the Peloton content.

After a safety recall, Peloton starting selling their treadmill again last Monday. I purchased one first thing Monday morning. It was delivered and installed this afternoon. 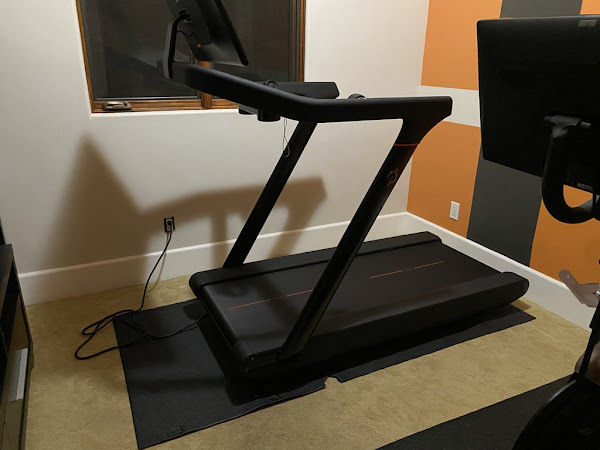