Sharon and I played golf at Bing Maloney with the Gainsleys. It is probably only the second time that I have played the course in fourty years. I was haunted by some fragments of memories of playing the course with Nooter, Wallen and Dave Hare.

Teeing off at 10:36 am, I enjoyed the company and the course. In spite of how much golf we have been playing, I remain frustratingly inconsistent. My goal is to legitimately break 100. 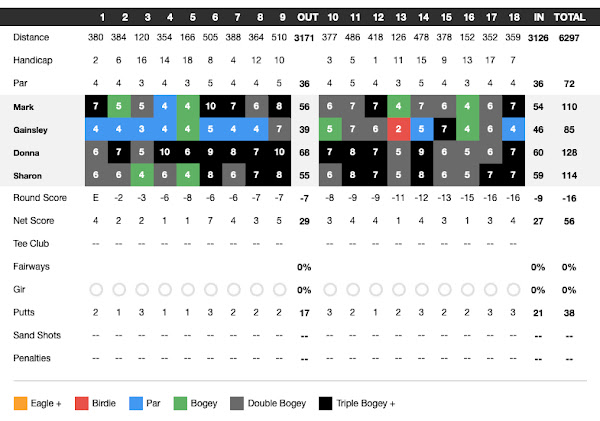 The four of us finished the day with an early dinner at Scott's Seafood on the River. Sharon and I split an order of Pork-Kimchi Potstickers [asian slaw / sweet chili drizzle / bulgogi dipping sauce]. I had some Boston Clam Chowder. For entrees, I had Lemon Grilled Hawaiian Swordfish [summer vegetable risotto / grilled asparagus / sundried tomato pesto], while Sharon had the Macadamia Nut Crusted Alaskan Halibut [brown butter / citrus wild rice pilaf / steamed vegetables].
By Heringer at 9/12/2021 11:59:00 PM