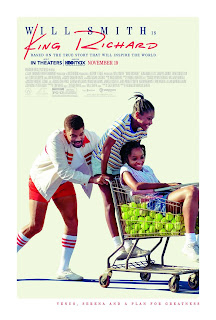 Saturday night, Jack, Drew, Sharon and I watched King Richard on the AppleTV on HBOMax. We are starting our annual odyssey to watch the potential Oscar Best Picture candidates. Golddebery.com currently has King Richard with the third best odds to win the Best Picture Oscar.

King Richard is a biographical drama film directed by Reinaldo Marcus Green and written by Zach Baylin. It follows the life of Richard Williams. Williams is the father and coach of tennis players Venus and Serena Williams. I was surprised to see that Venus and Serena are executive producers for the film.

This is a very good film; I recommend it. From my perspective, it is particularly powerful because the events are accurate. I would bet that the movie gets a Best Picture nomination. I am also pretty sure that Will Smith's performance will get a Best Actor nomination.
By Heringer at 11/29/2021 11:59:00 PM