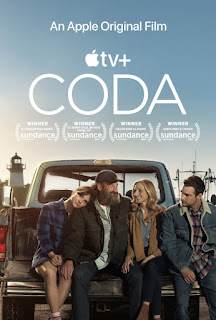 While we were at the Salishan on our anniversary trip, we watched CODA on the AppleTV. It is available on the Apple TV+ streaming service. This was actually an early start on our annual journey to watch the potential Oscar Best Picture candidates. Golddebery.com currently has CODA listed as ninth on their Best Picture predictions.

CODA is a 2021 coming-of-age comedy-drama film that follows a hearing teenage girl who is a child of deaf adults (CODA for short). The film is set in Gloucester, Massachusetts. The family are fisherman.

Written and directed by Sian Heder, the film stars Emilia Jones as the hearing girl. Marlee Matlin and Troy Kotsur are her deaf parents, while Daniel Durant is her deaf brother; all three are deaf actors.

This is a solid enjoyable movie. I recommend it. I am not sure that it will get a Best Picture nomination, but I think that it could garner several acting nominations.
By Heringer at 11/04/2021 05:00:00 AM