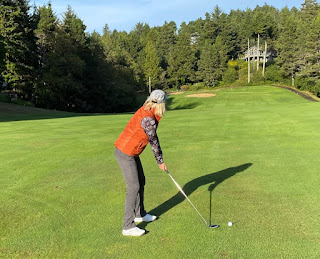 With few options on site, we had breakfast at the Provisions Market. We both had steel cut oatmeal.

The original plan for the day was golf. Unfortunately, it was raining hard. After stopping briefly at the pro shop, we decided to pivot and head North.

We drove to Tillamook. I have been there once for work. We stopped at the Blue Heron Cheese Company. It was a tourist trap; I don't recommend it. We did end up buying some cheese for the fall dinner party.

From there we drove to the Tillamook Creamery. This was more professionally organized and intellectually interesting. You have a chance to see the factory floor. I bought some ten year old cheese that might make it to the dinner party...

For lunch, we headed to Schooners in Netarts. We had a very nice lunch that included chowder, oysters and a Crispy Calamari Salad [Calamari, cabbage medley, cilantro, mint, peanuts + sweet chili vinaigrette].

Sharon drove the next leg. We followed the Three Capes Scenic Loop to Pacific City. We stopped and had a couple of beers at the Pelican Brewery. We bought some beer for the fall dinner party.

With the weather clearing up, we decided to head back to the golf course. We ended up playing the front nine at the Salishan Golf Links. It is a beautiful course. We had no one in front of us or behind us. Without a warm up, I struggled initially, but struck the ball well as the round went on. The greens were treacherous. Although they were wet, they were cut very short and were very fast.

I ended up with a very, very liberally scored 55. The scorecard is here.

Getting cleaned up, we headed to dinner at Fathoms Restaurant at the Inn at Spanish Head. After more oysters, chowder and a salad, we both had grilled wild pacific salmon with wild rice.