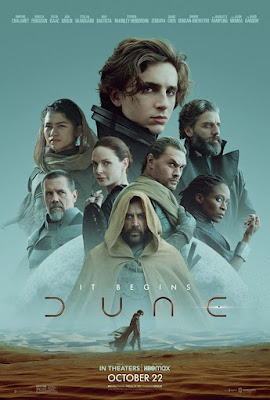 Saturday night, Sharon and I watched Dune (titled onscreen as Dune: Part One) on HBOMax on the AppleTV. I have read the book at least twice, but the last time was almost twenty years ago. We are starting our annual odyssey to watch the potential Oscar Best Picture candidates. Golddebery.com currently has Dune listed as fourth on the Best Picture prediction.

The film is the first of a planned two-part adaptation of the 1965 novel of the same name by Frank Herbert. It primarily covers the first half of the book.

Set in the far future, it follows Paul Atreides (Chalamet) as he and his family, the noble House Atreides, are thrust into a war for the dangerous desert planet Arrakis.

Although Sharon doesn't enjoy science fiction, she liked the movie. I also enjoyed the movie and recommend it. It would have been nice to see it in a theater on a big screen. Even though it has a running time of more than two hours and thirty minutes, it didn't drag. I am not a Timothée Chalamet fan like Sharon, but I thought that the casting of him as Paul Atreides worked. I don't believe that it has any chance to win Best Picture.
By Heringer at 10/30/2021 11:59:00 PM