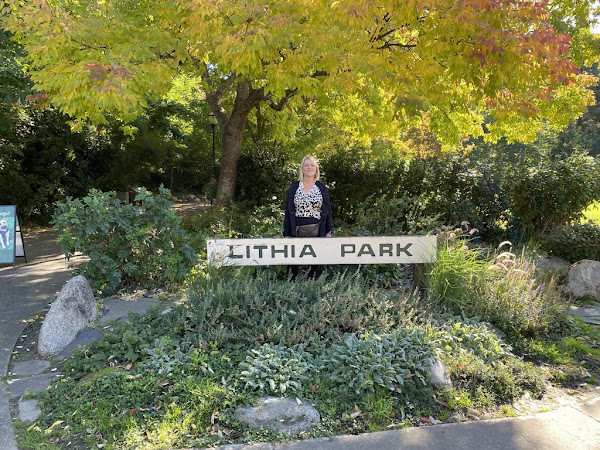 Sharon and I are off for two weeks to celebrate our 25th Wedding Anniversary. Originally, we were planning to do ten days in Paris. In May, we decided to pivot and do two weeks in Oregon. Although we have taken a number of trips, it has probably been almost five years since I took two full weeks off and unplugged from work.

Rolling from the house at 7:45 am, we switched drivers just north of Red Bluff. We stopped for lunch at the Mount Shasta Resort. We had a very nice lunch. Sharon had a Farro Salad, while I had Baja Fish Tacos. This is definitely somewhere we would come back and play golf.

We switched drivers again. I drove to Ashland. Unfortunately, we started to have trouble with Carplay; hopefully, we will be able to get it working on the trip.

We rolled into Ashland just after 2 pm. I had never been to Ashland before. We are staying one night at the Ashland Creek Inn in the Sienna Room. It offers a 2 pm check-in.

After getting settled in the room (including lugging 150 pounds of luggage up four flights of stairs), we took off for a hike. The plan for the afternoon was a hike in Lithia Park. We covered just over three miles in an hour and twenty minutes. A map of our hike is here.

On the way back to the hotel, we stopped and had a beer and glass of wine at Oberon's Restaurant & Bar. There is a section of the creek with restaurants that reminds of San Antonio.

We finished the night with an early dinner at Amuse. Sharon and Tom had dinner there before. We had two appetizer specials that were very good: a cauliflower salad and a mushroom dish. For entrees, Sharon had Charcoal Grilled Steelhead [Pole Beans, Concasse Tomatoes, Herbs], while I had Seared Duroc Pork Loin [White Beans, Local Kale, Apple Gastrique]. The meal was very good. Sharon is going to rate all of the meals over the course of the trip. Sharon said that this was a 10.
By Heringer at 10/01/2021 11:59:00 PM