After packing up the room, we had breakfast in the Jory Restaurant at the Inn. We both had huevos rancheros [crispy tortilla, two fried eggs, avocado crema, black beans, ranchero salsa, house chorizo].

Loading the car, we rolled from the inn about 10:15 am. With the wine purchases in the Williamette Valley, the car is very loaded down.

A litte over an hour from Newberg, we stopped at Silver Falls State Park and hiked the Trail of Ten Falls. We ended up seeing seven of the waterfalls. We covered about 5.75 miles in two and a half hours. A map is here. 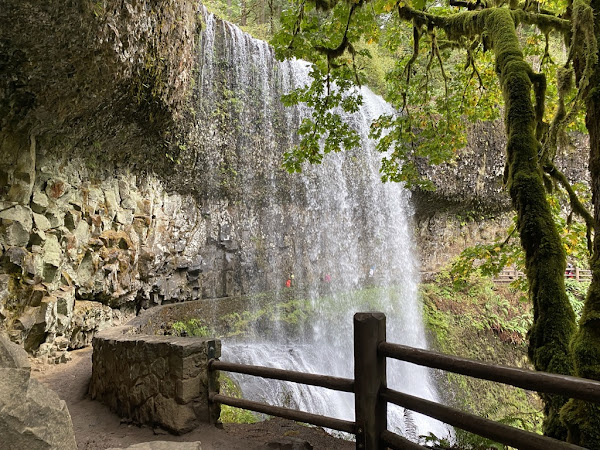 It was a spectacular hike!

Back in the car about 3:30 pm, it was three hour drive from there to Sunriver. We rolled up to the Sunriver Lodge just after 6:30 pm. We are spending the last four nights of our trip at Sunriver Resort.

After unloading the car, we drove back to the lodge. We had dinner at Carson's American Kitchen. I started with CLAM CHOWDER [cream, Yukon Gold potatoes, bacon lardon, mirepoux, Manilla clam], while Sharon had an ICEBERG WEDGE [bacon, tomato, bleu cheese crumbles, and bleu cheese dressing]. We both had ELK MEATLOAF [Topped with bacon, caramelized onions, Sunriver's signature coffee BBQ sauce and served with broccolini and butter whipped mashed potatoes]. Sharon said that it was the best meatloaf that she ever had!