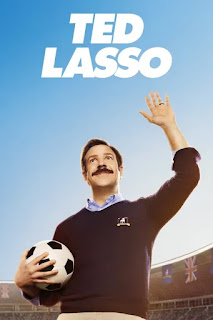 After taking Lee trick or treating on Sunday night, we watched the last episode of Season Two of Ted Lasso. Sharon and I finished season one in July.

The series follows Ted Lasso, an American college football coach who is hired to coach an English soccer team in an attempt by its owner to spite her ex-husband. Lasso tries to win over the skeptical English market with his folksy, optimistic demeanor while dealing with his inexperience in the sport.

I really enjoyed both season one and two. I highly recommend it. As I said after watching the first episode, I was very surprised by the tone of the show and touched by the portrayal of the main character. I am looking forward to season three next year.

I listened to The Ringer Presitage TV Podcast about the season two finale. They talked about Nate's story arc in season two as Jose Mourinho's origin story