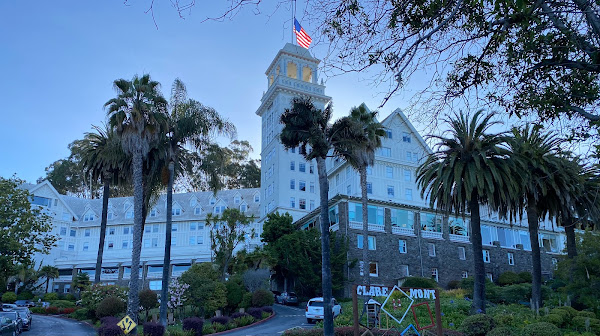 In the early afternoon, Sharon and I took off for Berkeley. We are spending two nights at the Claremont Hotel. With Drew and Carmen settled in a house in Orinda, we wanted to stay somewhere close by. I suggested this hotel and Sharon jumped on the idea.

We rolled up to the hotel just before 3 pm. The room was ready. The hotel is a little bit of a maze. We had to go down a floor from the lobby to the spa, hike across first floor, take an elevator up to the second floor and then find the room. It is an odd layout. The room had a nice view of the Golden Gate Bridge and the bay.

After getting settled in the room, we wandered back to the front of the hotel. There is an outside area set up with a bar in a trailer. The seating area has great views of San Francisco, the bridges and the bay. We had a glass of rose and a Cheese Board [selection of artisan cheeses, honey, preserves, grilled sourdough].

We had dinner in the Limewood Bar & Restaurant in the hotel. We split a Garden Salad [spring lettuce, asparagus, radish, shiso vinaigrette]. For entrees, I had a Heritage Pork Loin Chop [garnet yams, sauce charcutiere], while Sharon had 1/2 a Fried Chicken [fried potato salad].

The food was only ok. Both of us were surprised at how causal the restaurant was; we expected something a little more upscale. Additionally, the restaurant and the hotel in general was overun by families with small kids which seemed odd.