After some initial confusion, Donna, Kevin, Sharon and I ended up playing Dry Creek Ranch Golf Course on Sunday morning. I was pleasantly surprised by the condition of the course; the fairways and greens were in good shape.

It has probably been thirty-five years since I played the course with Nooter. I have a couple of strong memories from the round, including Nooter getting mad at a foursome in front of us and him eagling a par four from about 170 yards.

I probably should not have played. Over the last two plus years, I have started to do some light upper body weight work. Increasingly the frequency this year, I lifted on Monday night. I woke up early Tuesday morning and could hardly move. I was able to get everything loose on Sunday morning, but I should probably have begged off. I am just too stubborn.

I had a horrible start. I finally got going a little bit in the middle of the round, including a very nice par on the thirteen. Unfortunately, I started struggling again on the last few holes. I ended up with a very liberally scored 120. Given that this is the eleven time that I have played golf this year, you would think that I should be better!?! 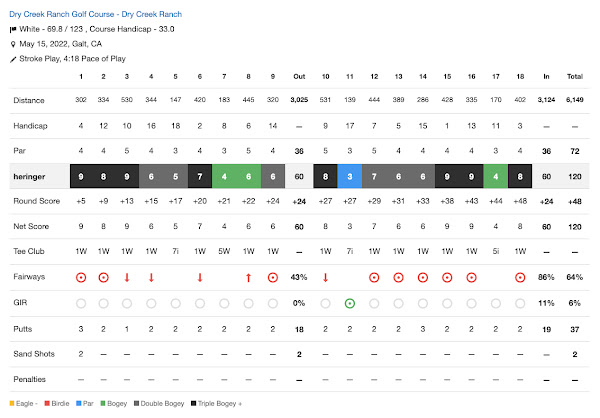