After watching Top Gun on Saturday night, Jack, Sharon and I went to an early 10 am showing of Top Gun: Maverick at the Country Club Cinema. Buying tickets on Friday night, I was surprised to find only seats available in the first two rows. We sat in B7, B8 and B9 in theater 10.

Over the course of the weekend, Sharon and I watched the US Open from The Country Club in Boston. Sharon was rooting for Will Zalatoris; she had followed him at the PGA Championship. Matt Fitzpatrick won. He beat Zalatoris by a stroke.

After running on the treadmill, I connected with Drew, Lee, Morgan and Daniel on Facetime. It was nice to talk to them. It warms my heart that Lee greeted me chatting Fazha.

Jack, Drew and I played Catan. I thought that I was doing well in the first game, but Jack came out of nowhere to win. Drew won the second game going away. 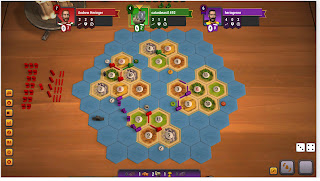 I barbecued hamburgers for dinner.