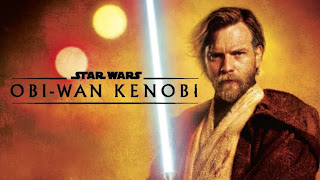 Tuesday night, Sharon and I watched the last episode of the Obi-Wan Kenobi miniseries.

Set ten years after the events of Star Wars: Episode III – Revenge of the Sith (2005), the series follows Kenobi as he sets out to rescue the kidnapped Princess Leia (Vivien Lyra Blair) from the Galactic Empire, leading to a confrontation with his former apprentice, Darth Vader (Hayden Christensen).

I enjoyed watching Ewan McGregor. Drew noted that he and Carmen were saying how they left the last episode feeling a little underwhelmed because the stakes are so low when you know that everyone is going to survive. It was fortuitous that we watched Revenge of the Sith right before the miniseries started. It will be interesting to see if they do a second season.
By Heringer at 6/30/2022 11:59:00 PM