Jack's Soccer team, the Cobra's, played its first soccer game of the season. They won the game by a a score of 7 to 1. Five different kids scored goals. Jack played forward in the first period and scored one goal on one shot. Although he does not have a particularly strong foot, he does an extremely good job with his spacing; he avoids getting bunched up. Jack also does a good job of advancing the ball down the field.

He played goalie in the third quarter and never had the ball get anywhere near him. Essentially, the ball never came across midfield. In the fourth quarter, he played full back. 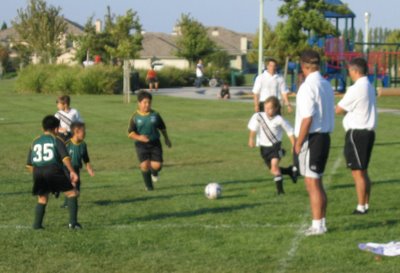