Jack's team played its second soccer game of the season. Missing two of its best players and facing a team with two huge kids, I wasn't sure how the day was going to go for his team.

Jack started at forward and had five shots in the first quarter, one off of each upright and two just wide, but no goals. After playing the whole first quarter in their end of the field, one of the huge kids got behind our fullbacks, rumbled down the field and scored.

Jack played midfielder in the second quarter. He scored one goal on two more shots. One of his youngest teammates scored putting his team ahead 2 to 1 at half-time.

Jack was goalie in the third quarter. The ball rarely came across midfield and he had one stop.

With the team shorthanded this week, he played forward again in the fourth quarter. He scored with his right foot early in the quarter putting his team up 4 to 1. 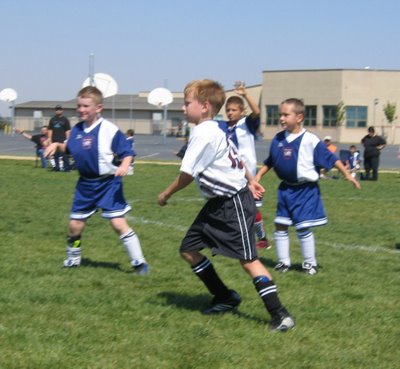