Jack played in his seventh soccer game of the season. He played forward in the second period and fullback in the third quarter.

Jack scored one goal on two shots. He also had a couple of great centering passes that the team was not able to convert. Jack got a more than a little frustrated in the second period because he felt that the midfielders were passing the ball to other forward even though he thought that he was open.

The other team was coached by a parent of one of Jack's classmates. The parent also works for Sutter and took the fourth share of the Kings season tickets this year. Jack and his son played on the same team two years ago.

Jack's team won by a final score of 6 to 1. The team's record is now 9 wins and no losses. 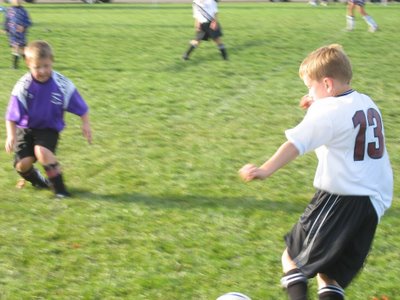