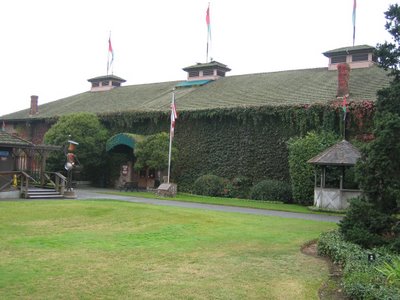 Formerly the Groezinger Winery, the Vintage 1870 complex was originally built in the year 1870 by German-born vintner Gottlieb Groezinger. One of the largest facilities of its day, the Groezinger Winery and family home occupied more than half of the 23-acre Groezinger Estate. It included a massive brick winery, a brandy distillery, a steam power plant, creamery, brick stables and barns, and a two-story estate mansion (now Compadres Mexican Bar & Grill) to the north of the property. The property was sold by the Groezinger family in 1889, but remained an operating winery under successive owners until 1955.

In 1966, the old winery, abandoned and in disrepair, was scheduled to be torn down for the $30,000 sum that its antique bricks would bring on the salvage market. Instead, a group of local business people purchased the 23-acre Groezinger Estate and began the initial conversion and restoration that would be the property's second incarnation. Hosting a handful of specialty shops and two small cafes, the buildings were reopened in 1967 as the Vintage 1870 specialty shop complex. Over the past 30 years, and under subsequent ownership, the buildings have undergone continuing restoration.