In a light rain, Jack played in his first game of the 2008 baseball season against the Red Sox. He moved up from AA last year to AAA this year. It is going to be more of a challenge; he is by far the smallest kid on his team.

Jack went 0 for 3 at the plate. He struck out the first two times up. In his third at bat, Jack grounded to the right side of the infield and was just barely out at first on a fielder's choice.

Jack played shortstop for five innings. He made a couple of good plays in the field. In the first inning, he was in the middle of a triple play. Jack also made a great play on a grounder hit sharply at him.

The Padres lost by a score of 7 to 4; their record for the season is 0 wins and 1 loss. 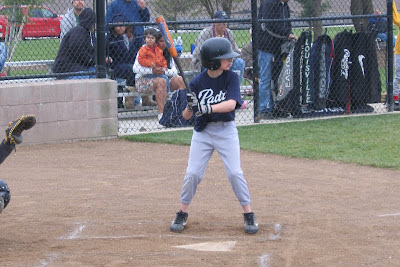