When we were at Spring Training last year, I started pushing the idea of a day trip to Tucson. The idea caught on and we ended up getting tickets to see the Diamondbacks versus the Dodgers at Tucson Electric Park for Friday. It is about a two hour drive south from Phoenix to Tuscon.

Jack and I took off early ahead of the group. We took a side trip to the San Xavier del Bac Mission. This historic Spanish Catholic mission is located about 10 miles south of Tucson. It was mentioned in the book Death comes to the Archbishop that I read last summer and was part of the Santa Fe Diocese in the 1850s.

Jack and I toured the church and then climbed the hill near the the mission. At the top, there was a roadrunner about five feet from us. It stood and watched us for a long time before gliding away. Jack got the biggest kick out of seeing the roadrunner and talked about it the rest of the day.

After the mission, we met up with everyone at the park. I was pleasantly surprised to find out that Randy Johnson was pitching for the Diamonds. The Diamondbacks rallied to win the game by the score of 8 to 7.

Much to Jack's delight, I ended up catching a t-shirt that was thrown in the stands. We were sitting down the first base line in prime foul ball country. Towards the end of the game, a ball was fouled off straight at us. Wallen dived out of the way and it slammed into the seat that he was in.

We headed back to the Phoenix and finished the evening walking to Three Margaritas for dinner. 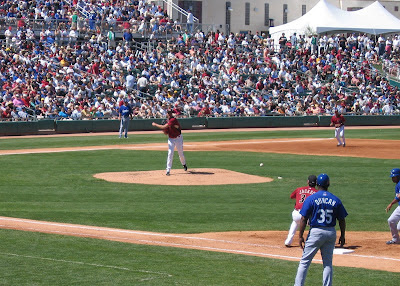 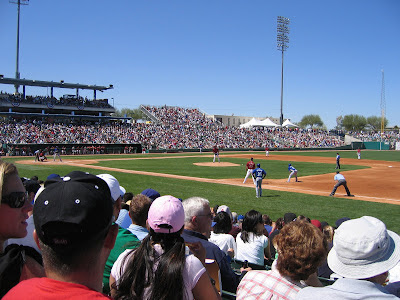 Shannon and Drew at Sea Ranch