When the planning for the this year's Spring Training trip started, I failed to realize this was Easter. It was not until after we had brought the tickets for the games and plane tickets did we realize that it was Easter weekend.

I got Jack up a little after 6:00 a.m. and we went to Mass at Our Lady of Mount Carmel.

Afterwards, we met up with the group and had breakfast at Harlow's Cafe. Carol found this restaurant a couple of years ago and we have been making it an annual stop ever since.

The schedule for the day called for us to see the Texas Rangers play the San Francisco Giants at Surprise. We were short one ticket for the day. Consequently, Wallen, Bill, Jack and I headed to the staduim early to buy another ticket. After buying the ticket, we watched the Giants take batting practice. We ended up with a couple of baseballs. Jack was able to get a ball signed by Erick Threets, a Giant's pitcher who was shagging balls in the outfield.

I had forgotten how nice the Surprise ball park is. It is probably my second favorite Arizona venue, behind only Maryvale.

We got to see Tim Lincecum pitch for the Giants. He pitched pretty well, but the Giants ended up losing by a score of 5 to 2.

After the game, we headed back to the hotel and hung out around the pool for the first time on the trip. For dinner, Wallen wanted to go back to the Italian restaurant that we went to last year, but it was closed. We headed into downtown Scottsdale and had dinner at the Italian Grotto.

With a number of people flying out very early in the morning (Wallen was planning to get up at 4 a.m.!), it was a fairly early night. I got Jack back to the room and in bed before 10 p.m. 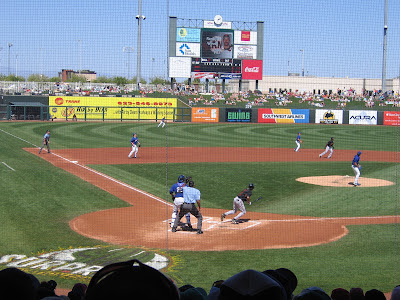