Bayley Hotel
also known as the Bayley House
National Register of Historic Places #1978000660
See this location on Yahoo Maps in Flickr
See this location on Google Maps
This historic place is located north of Pilot Hill on CA 49 in the county of El Dorado, California. The GPS coordinates for this location are N 38° 50.635 W 121° 00.891. 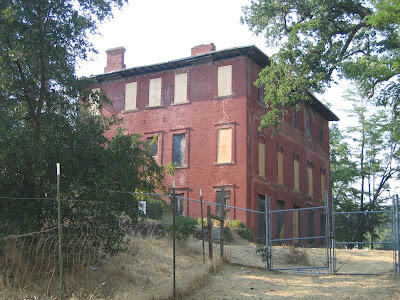 Construction on the Bayley House began in 1861, after A.J. Bayley's first hotel in Pilot Hill, the Oak Valley House, burned to the ground earlier that year. Prompted by this loss and rumors that the Central Pacific Railroad would soon be built through Pilot Hill, Bayley started construction on his biggest project.

Bayley had every reason to believe that the railroad would be routed through the trail that John C. Fremont surveyed, which ran past his property, because it had already been established as a freight haulers route. He knew that the "Big Four" railroad barons were seriously considering this Fremont Trail as the route for the railroad to take on its journey over the Sierras to become part of the first trans-continental railroad.

Enter Theodore Judah, a brilliant engineer who found that routing the railroad through Auburn and Dutch Flat would be easier and less expensive. His idea was eventually accepted, leaving Bayley with a massive Southern style estate in the middle of the rolling foothills of El Dorado County, one that would not realize its potential as an important and busy oasis for rail passengers.

Nevertheless, the fact remained that A.J. Bayley had designed and built one of the finest homes in the West.

The 10,000 square foot Bayley House was built with 22 rooms, including two ladies' parlors, a bar room to the left of the entrance, and a grand ballroom on the third floor that doubled as an observatory. The 300,000 bricks that faced the exterior were manufactured on location, as was all the fine wood used in the house milled on the property. Rosewood and mahogany were imported from England. A double piazza supported by eight huge hardwood columns provided a shady retreat off the second floor where guests could relax and enjoy the view. A spectacular circular staircase wound sharply from the double-door foyer to the second and third floors, with a highly polished mahogany railing. To help keep the house warm and inviting, it was outfitted with six fireplaces, two with marble insets, and underneath it all was a huge wine cellar, where one of California's first winemakers stored the product of his vineyards.