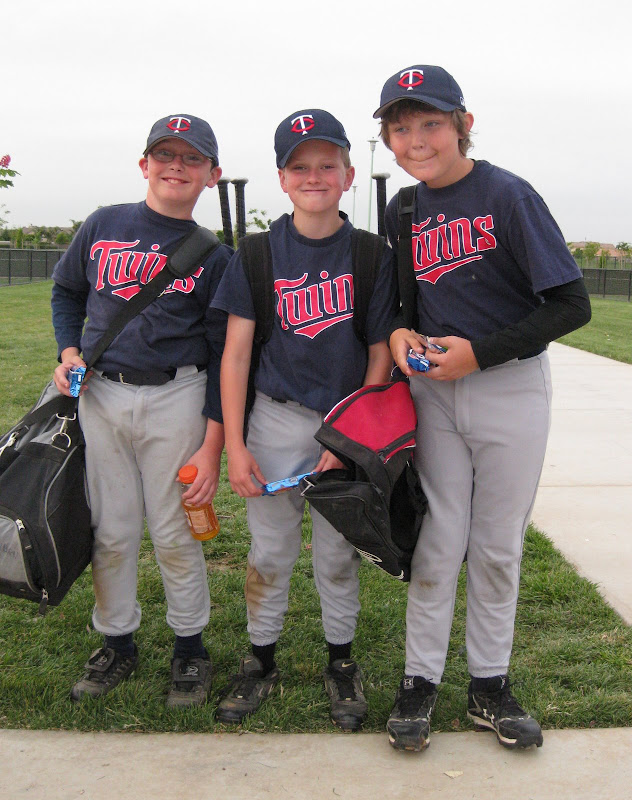 Jack played in his ninth game of the 2009 Laguna Youth Baseball Minor League Season. The Twins played against the Dodgers. The Twins lost to the Dodgers by a score of 8 to 4 in the third game of the season. There were two kids on the other team from the Gunners: Niko and Cooper. Niko pitched the third and fourth innings.

At the plate, Jack was 1 for 1 with a walk. In his first at-bat, he ran the count to 3 and 2 and then walked. The inning ended with him still at first. Jack hit a 2 and 2 pitch very high into deep center for a double off Nikko in his second plate appearance. He stole third, sliding in just ahead of the tag on a ball that rolled away from the catcher. The inning ended with Jack at third.

Jack's double was the only Twins hit of the game!?!

Jack played two innings at shortstop, pitched two innings and played one inning at third base. He pitched the third and fourth innings throwing 32 pitches. Although his two innings at shortstop were uneventful, the inning at third was exciting. With Cooper on third, a grounder was hit to Jack at third base. Jack froze Cooper between third and home, chased him towards home and then threw a strike to the catcher to get Cooper out at the plate. The next batter hit a grounder to short. Tanner fielded the ball and threw the runner out at first. The runner at second belatedly decided to head for third. Ian threw the ball back to Jack who tagged the runner out as he slid into third. As much as the Twins have struggled in the field, it was fun sequence to watch.

The Twins lost the game by a score of 6 to 0. The box score is here. Their record for the season is 3 wins, 5 losses and 1 tie.