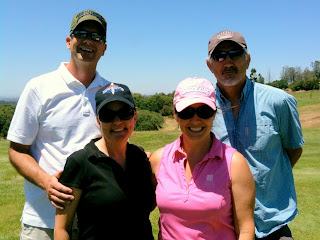 The tournament is a charity fund raiser for the hospitals. In 2007 and 2009, I was asked to play with vendors who made a contribution. I missed the 2009 tournament due to our Alaskan vacation.

Given the state of the economy, they had trouble getting vendors to contribute this year. I ended up being able to put together my own foursome at the last minute. Shooting out a number of e-mails on Monday, I ended getting the Kevin and Donna plus Jayne back to play together.

For the second year in a row, the tournament was played at the Bass Lake Golf Course near Rescue.