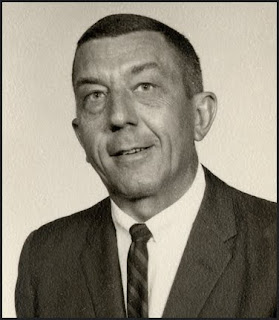 Died on Friday, June 25, 2010, age 91. Jim, also known as Jimmy, was born at home on September 1, 1918, in Anderson, Ind., just northeast of Indianapolis, the only child of James Spurtle Gale and Myrtle Fry. Jim had a happy childhood spending summers at a family summerhouse on the shore of Lake Michigan in Michigan. He graduated from Anderson High School in 1936 and Indiana University at Bloomington in 1941 with a bachelor of science in chemistry. After graduation he worked briefly as a metallurgist until he enlisted in the Army Air Force in 1942, participating in the air offensive against Japan in the Western Pacific and serving as an airplane armorer with the 458th Bomb Sqd. of the 20th Air Command, primarily on Guam and attaining the rank of corporal.

After the war Jim pursued graduate studies at the University of Southern California and completed a master's thesis on the geology of the Pacific coastline and was inducted into Sigma XI Honor Society. His subsequent career was as a petroleum landman, researching title to mineral rights and acquiring oil and gas leases primarily in the Sacramento Valley working for among others Texaco, American Petrofina, Del Paso Exploration and finally for locally-based Pacific Energetics. Always active, he never formally retired.

Having outlived all his close relatives and many of his friends he is survived by his honorary niece Rebecca Frame and honorary nephews Tom, Kevin and Eric Frame, who were all honored to have him as their honorary uncle. A unique but jovial character with an acerbic wit, he will be missed by them, coworkers, friends and acquaintances and most especially the gang at Pancake Circus on Broadway, whom he considered his adoptive family.

A brief memorial service will be held at W.F. Gormley & Sons, 2015 Capitol Ave., on Monday, July 5, at 9 a.m. Afterward, friends are invited to congregate at the Pancake Circus, 21st and Broadway to reminisce.

In lieu of flowers, donations may be made to the Shriners' Hospital, Sacramento, or Indiana University Scholarship Fund, Bloomington, Ind.
By Heringer at 6/30/2010 05:30:00 PM