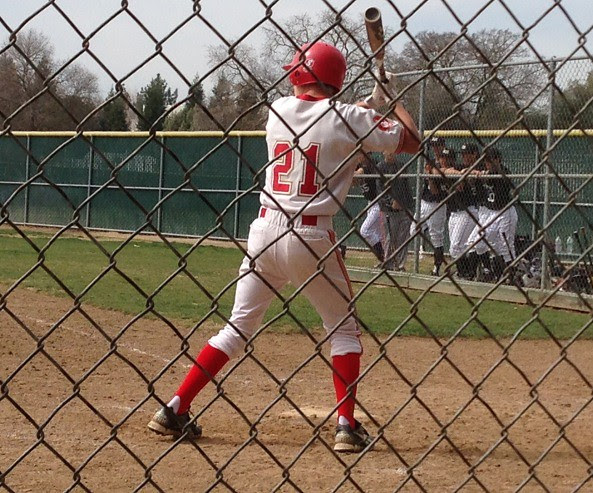 I said after last week's scrimmages against Rocklin and Davis that the Jesuit Frosh baseball team was stacked. This dynamic changed more than little during the last week. The coaches moved their best pitcher (Cosca) up to JV to replace a JV pitcher that was moved to varsity. This loss has a cascading impact that weakens the team. It will be interesting to see how this plays out over the next couple of months. While I think that it is bad for team, it is probably good for Jack; moving Cosca to JV removes a bat as Jack is fighting for playing time.

The Marauders played their first two games of the season--a double header--against Archbishop Mitty. Mitty is from San Jose.

In the first game, Jack was 1 for 2 with a single and an RBI in the first game. In the bottom of the fifth, Jared led off with a triple. Jack drove a 0 and 1 pitch up the middle for a single and a RBI. Unfortunately, the next batter, Bailey, grounded into a 4-6-3 double play to erase Jack. In his second at-bat, Jack popped a 2 and 1 pitch up to the shortstop for an out to lead off the seventh inning.

In the field, Jack played three innings in left field. He had no put-outs or assists. One line drive was hit to the left side that he fielded cleanly and threw back in. On the way to the game, Jack talked about how much of an adventure the freshman outfield is...

Giving up 8 runs in the top of the fourth inning on three walks, two hit batters and an error, the Marauders ended up losing the game by the score of 8 to 5. The box score is here.

After a short break to feed the boys, Jesuit turned around and played Archbishop Mitty again.

Jack was 0 for 1 with a strike-out. With Jesuit trailing by the score of 12 to 11 in the bottom of the eighth, Jack came into to pitch hit. It was a nasty situation. He had been sitting for three plus hours. With Christian on second and two outs, Jack struck out on a 1 and 2 pitch to end the game.

Jack did not play in the field in the second game.

The Marauders used four pitchers in the second game; Mitty actually used five. With some adventures in pitching, Jesuit lost the game by the score of 12 to 11 in eight innings. The box score is here.

The Jesuit Marauders freshman baseball team now has 0 wins and 2 losses for the season. The game log is here. The season to date team statistics are here.

I honestly thought that pitching was going to be one of the Marauders strong points. It will be interesting to see where the pitching is in a month. Third base is also going to be interesting. Two third baseman made five errors in the two games. The starting third baseman made four errors, but he went 5 for 8 at the plate with two doubles and a triple.
at 3/02/2013 11:59:00 PM