The Jesuit Frosh Marauders played the Davis Blue Devils at the Davis Sr High School. Jesuit beat up on Davis in a scrimmage in February.

Jack started the game in centerfield and led off.

At the plate, Jack was 0 for 2 with two walks and a run scored. In his first at-bat leading off the game, Jack hit the first pitch for a fly ball right at the centerfielder for an out. Jack grounded a 1 and 2 pitch to the right side and was thrown out at first in his second plate appearance. In his third at-bat in the top of the fifth inning and Jesuit leading by the score of 1 to 0, Jack walked on four pitches. He stole second, went to third on a passed ball and scored the second run of the game on a wild pitch. Jack walked on five pitches in his fourth plate appearance, but ended the inning there when Bailey grounded out to the second baseman.

In the field, Jack played seven innings in centerfield. He had one put-out. Jack made a nice catch on a sinking line drive to left center.

The Davis pitcher did a nice job of keeping the Jesuit batters off balance. Through five innings, Jesuit was leading by the score of 2 to 0 with only one hit. I will talk more about the Davis pitching at the end of the post. By the sixth inning, the Davis starting pitcher had thrown 101 pitches. He was visibly tiring. The two Davis relief pitchers were clearly not as strong. They opened the door for a couple more runs and Jesuit won by the score of 6 to 0. The box score is here and the scorecard is here.

The winning pitcher was Chiappe [3-0, ERA 1.75, 3 starts, 20 innings]. Remarkably, Chiappe only threw 69 pitches in a seven inning complete game; this is his second complete game in three starts. He only threw 15 balls! His first pitch strike percentage was 77%.

The Jesuit Frosh baseball team now has 7 wins and 3 losses. The game log is here. The Marauders will make up a rain out against Vista Del Largo on Friday night, March 22.

Unlike the St. Mary's pitcher on Tuesday night, the starting Davis pitcher tonight did a really good job mixing up speeds and location. He had the boys off balance... 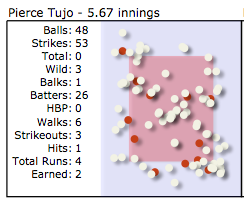 Here are the speed samples from tonight.