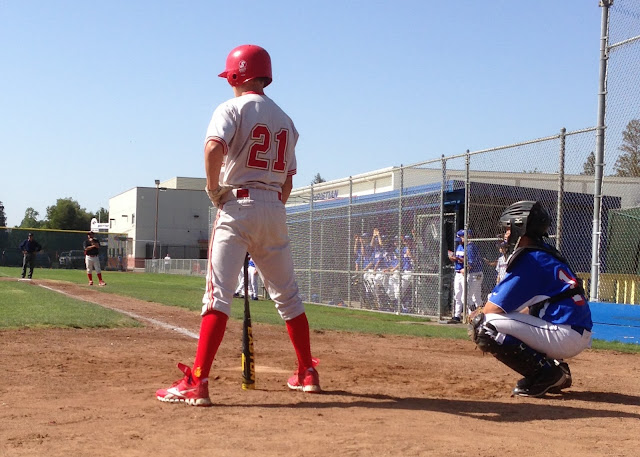 Jack lead off and played left field. Although Jack has been played centerfield most of the season, the coaches started Nile in center. Nile is the fastest player on the team and can cover a little more ground defensively than Jack.

At the plate, Jack was 2 for 3 with a walk, two singles and two runs scored. In his first at-bat, Jack drove a low outside 1 and 1 pitch into right center to lead off the game. Jack said after the game that the pitcher threw him the same pitch three straight times. He crushed the third one. One of the things that surprised me was that the Falcons started the same pitcher as they did in the first game. Talking to Alan Wackman at the varsity game, he said that CB really only had two strong pitchers: Andrew and Jeremy. Running through a stop sign, Jack went from first to third on Nick's line drive into right. The throw was off-line and the third baseman tried to throw back to second to get Nick. The ball sailed into right field and Jack raced home for the first run of the game.

Jack had a great at-bat in his second plate appearance. Falling behind in the count 1 and 2, Jack fouled off three straight pitches. After checking his swing to take a ball on the sixth pitch, he hit a hard ground ball up the middle for a single. Jack went to second on a balk, but ended the inning there after Jordan and Nick flied out to left field.

In his third at-bat, Jack struck out looking on 1 and 2 pitch that was very inside. We saw this umpire earlier in the season at the Ponderosa game. He has a very inconsistent strike zone. Neither set of parents were very happy with the way that he was calling balls and strikes.

Facing Jeremy in the top of the seventh, Jack got ahead in the count 3 and 0. He told me in the car later that once he got ahead 3 and 0 that he was determined not to swing at a pitch. Jack said that he was going to put the pressure on Jeremy to throw strikes. Jeremy came back with two strikes to get the count to 3 and 2. Jack drew a walk on a low inside pitch for ball four. With two outs, Nick grounded a ball right at the shortstop. The coaches had given Jack the steal sign and he got an enormous jump off the pitcher. Jack literally got to second base before the ball got to the shortstop. The shortstop took his eyes off the ball to glance at Jack and then didn't field the ball cleanly. Nick was safe at first on the error. Jared crushed the next pitch into deep right center for a double driving in both Jack and Nick.

Jack played seven innings in left field. He had two put-outs. Ironically, both put-outs were on balls hit by Jeremy: a high fly ball and a sinking line drive.

The Marauders gave up two unearned runs: one in the second on successive errors by the second baseman and third baseman and one in the fifth that tied that game on an ugly error by the right fielder and that was compounded by another error by the second baseman. With the scored tied 2 to 2 in the top of the sixth and two outs, Alex hit a line drive into left field to score Jared. The Marauders added two insurance runs in the top of the seventh when Jack and Nick scored on Jared's double. The Marauders won the game by the score of 5 to 2. The box score is here and the scorecard is here.

Chiappe (5 - 0, ERA 1.77, 6 starts, 31.2 innings) was the winning pitcher. Wolger closed out the game. Neither pitcher pitched against Christian Brothers in the first game.

The Jesuit Frosh baseball team now has 17 wins and 5 losses. In league, they have 10 wins and 1 loss. The game log is here. The Marauders next game is Monday, April 29 at home against Casa Roble. It is hard to believe, but there is just a little over a week left in the season.
Posted by Heringer at 4/27/2013 11:59:00 PM