The Jesuit Frosh Marauders baseball team played their fifteenth game of the season against Oak Ridge Trojans. After playing a number of home games, this game and five of the next six games will be played on the road.

Jack started in centerfield and led off. Not making excuses, but he was very under the weather. He fell asleep in the car on the way to the game, slept most of the way home after the game and ended up not going to school the next day...

At the plate, Jack was 0 for 4 with a walk, a steal, a run scored, a RBI and reached on an error. Oddly, he is tied for the lead on the team in reaching on an error. In his first at-bat, Jack grounded a 2 and 2 pitch to the second baseman and was throw out at first. With one out in the third inning and Nick on second, Jack grounded 1 and 1 pitch to the right side in his second plate appearance. The second baseman misplayed the ball, Jack was safe at first on the error and Nick scored from second.

With the Marauders trailing 5 to 3 in the top of the fifth inning, Jack led off the inning with a walk on five pitches in his third at-bat. He stole second, went to third on a passed ball and scored on the error on Jared's grounder to the left side.

Jack grounded a 1 and 0 pitch to the second baseman and was thrown out at first in his fourth plate appearance. In his fifth at-bat, he popped a 2 and 2 pitch into short right field for the out.

In the field, Jack played 6 1/3 innings in centerfield and 2/3s of an inning in left field. He had three put-outs. Jack made a nice catch on a sinking line drive in right center and handled a couple of hard hit fly balls.

Trailing 5 to 3 in the top of the fifth inning, the Marauders scored 6 runs. The Trojan's starting pitcher ended up throwing 94 pitches before they took him out with the bases loaded and one out in the fifth inning. The Marauders held on to win by the score of 10 to 5. The box score is here and the scorecard is here.

Redmond (2 - 0, ERA 1.24, 3 appearances) was the winning pitcher. Kane pitched the seventh inning. After struggling in recent outings, he was very effective; he threw 9 pitches: 6 strikes and 3 balls.

The Jesuit Frosh baseball team now has 11 wins and 4 losses. In league, they have 4 wins and 1 loss. The game log is here. The Marauders next game is Saturday, April 13 against Ponderosa.

The Trojan's starting pitcher did a nice job of mixing speeds. Unfortunately for him, he just left too many balls up in the strike zone over the plate. The pitching speed samples from the game include: 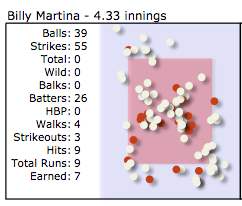