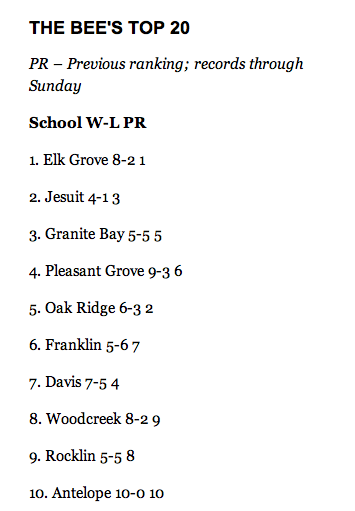 I am still having a hard time wrapping my head around the fact that almost everyone that Jack has played baseball and other sports with over the last five years is playing high school baseball on at least a junior varsity team somewhere: Trevor with Franklin JV; Patrick with Sheldon JV; Greyson with Consumes Oaks JV; Aaron with Elk Grove JV; and Josh with Laguna Creek JV; JJ with Rio Linda JV; Connor with the Folsom Varsity; Joe with Christian Brothers Varsity, and; Niko with the Laguna Creek Varsity.

Jack and I were talking in the car in the last week and he was emphatic that none of the other frosh players could make Jesuit JV team. While some of that is hyperbole, it has made me wonder about the relative strengths of the programs at the different schools. I know that Jack stacks up favorably against all of these other boys. Yet while all of them were making their JV and varsity teams, I was honestly anxious that he would even make the Jesuit freshman baseball team.

For almost two years, I have heard horror stories about how hard it would be to make the Jesuit freshman baseball team. I have heard repeatedly that it is the hardest team sport at the school to make. Jack's experience with the try-outs validates those stories. To have a chance to make the team, a kid really has to have played a lot of baseball; Jack probably played 250 tournament games in the last four years.

I then glanced at the high school baseball team rankings in the Sacramento Bee this week. Elk Grove was ranked #1 and Jesuit was ranked #2. In the Maxpreps Northern California rankings, Elk Grove is ranked fourth and Jesuit is ranked sixth.

Elk Grove is a very good and competitive program, but it is somewhat of a “who you know” program [you really need to come up through the Longhorns]. I have come to the conclusion that Jesuit may be the hardest high school baseball program in the Sacramento area to break into. Obviously, this varies from year to year.

One footnote. While Sharon and I were walking around before dinner at the PACE dinner and auction, we bumped into one of the parents who is on the Booster Club Board with Sharon. We mentioned that Jack had made the freshman baseball team; his son had not. The look that came over his face was interesting: a frown and then a glare. He acted like he was mad at us for Jack making the team, while his son did not...
at 4/05/2013 11:59:00 PM