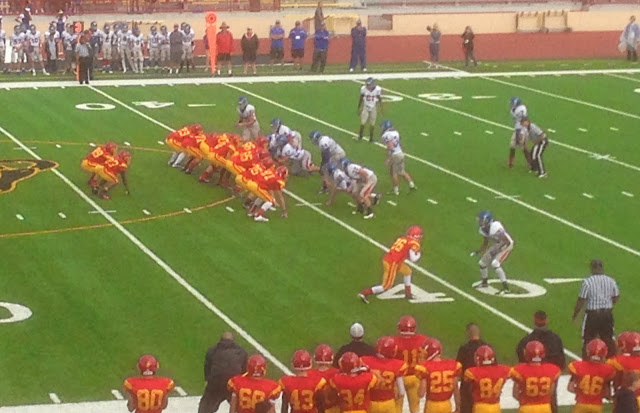 Jack had two classmates from Jesuit [Andy and Carter] spent the night on Friday. Sharon and I plus the three boys took off for Hughes Stadium a little before 2 pm. At this point, it was raining hard. I parked in the parking garage near an exit and close to where I parked last year. While the boys roamed, Sharon and I tailgated by ourselves next to the car. About 3:30 pm, we wandered over to the Jesuit Tailgate party and had an early dinner. Although it sprinkled off and on over the course of the evening, the rain had pretty much stopped at this point.

From there we headed into the stadium and watched the first half of the JV game. Like last year, we sat with the Chappelles. The game was tied 7 to 7 at half-time. At this point, we wandered back out to the parking lot. We caught up with the Renterias. After visiting with them for a while, we headed back into the stadium to watch the end of the JV game. Walking into the stadium, we ran into the Sanborns. The JV team ended up losing by the score of 14 to 7. Michael Chappelle scored the only touchdown on a long pass.

On the strength of Jesuit's Ben Parietti's Holy Bowl-record 280 yards rushing and four touchdowns, Jesuit beat Christian Brothers by the score of 52 to 28. Coming into the game, Jesuit was ranked 18th and Christian Brothers was ranked 19th in the Sacramento area. Jesuit looked much better running the veer than they did last year.

We made a fairly easy get away after the game and were home a little after 10:30 pm.