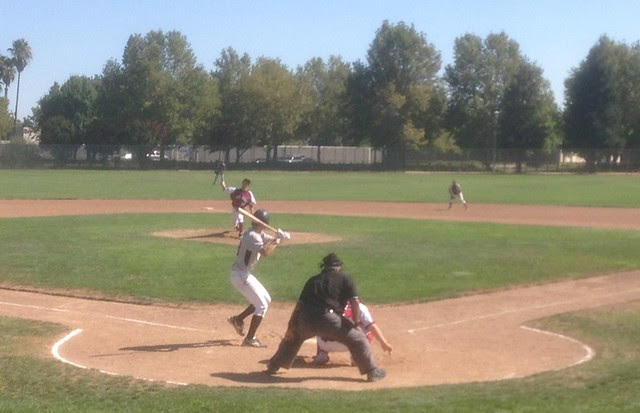 For the only the third time this year, Jack played with the Outlaws: Tournament #1, Day #1 and Day #2, and; Tournament #2, Day #2. The Outlaws played in the Super Series West All In Tournament in the 16u division. They played the first game against South County Baseball.

Batting fourth, Jack was 0 for 2. In the first at-bat, Jack ran the count to 1 and 2, fouled off two pitches and then struck out swinging on a high pitch. Jack hit a 2 and 2 pitch for a soft line drive down the first base line in his second plate appearance. The first baseman was just able to make a leaping catch for the out.

In the field, Jack played five innings in centerfield. He had two put-outs.

The Outlaws gave up 6 runs in the top of the first and never got back into the game. Committing four errors and failing to get even one hit, the Outlaws lost the game by the score of 12 to 0. It was pretty ugly...

Unfortunately, it appears that Jack strained his groin in the last at-bat. We ended up shutting him down for the day and probably the weekend. Hopefully, Jack will be healthy enough for fall ball practices next week. It appears to be similar to the injury that he suffered in June, but on the other leg.
By Heringer at 9/07/2013 11:59:00 PM