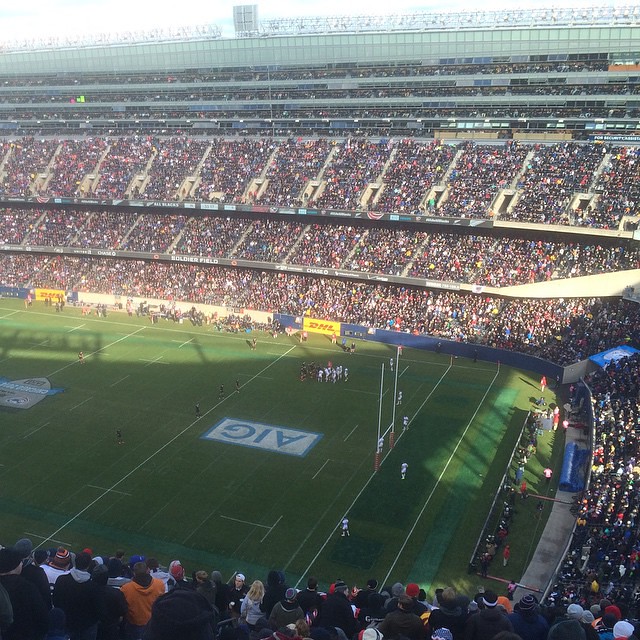 Another long day… With lots of walking… I estimate that I walked more than 6 miles over the course of the day. The main event was the New Zealand All Blacks versus the USA Eagles Rugby game at Soldier Field.

After the early morning and late night on Friday, I ended up sleeping until after 8:30 am.

The group eventually rallied and had breakfast at the hotel. From there we decided to walk towards Soldier Field. Nooter led us to The Gage, a place that his niece had recommended. This turned out to be a fortuitous stop; Nooter ran into some guys he knew from a DC rugby club who invited us to a private party after the game.

From there, we headed to the parking lot behind the stadium. Swedberg's son plays rugby for St. John's in St Joseph, Minnesota. We joined their tailgate party.

Finally, we headed to the game and took our seats well before the 3:00 pm kick-off. I was amazed that the stadium was sold out with 61,000 rugby fans. Unfortunately, the All Blacks jumped on the Eagles early. The final score was 74 to 6. The game didn't even feel that close.

A number of us saw New Zealand play Tonga in the opening games of the '11 Rugby World Cup. The All Blacks won that game by the score of 41 to 10.

After the game, we walked back to The Gage. With 61,000 rugby fans roaming the downtown, we were lucky to be able to get into the private party in the basement.

The group made a decision to look for Chicago pizza for dinner. We walked another mile and a half and eventually ended up at Lou Malnati's Pizzeria. The place was packed; we ended up waiting a little over an hour.

Tomasin, Nooter, Hunter plus one and I ended the night listening to music at Buddy Guy's Legends. Tomasin, Nooter and I walked back to the hotel trying to wrap our brains around an enigma. We failed.
By Heringer at 11/01/2014 11:59:00 PM