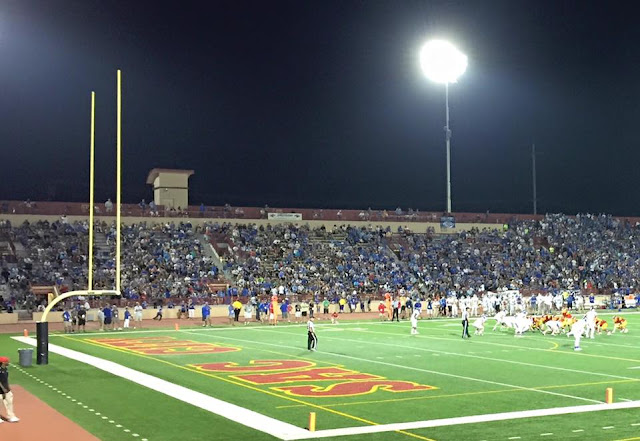 I got there about 4 pm. Tailgating in the parking garage, I made a tactical error. I left the door open in the car. Without locking the car, the headlights stayed on. As a result, the battery was dead when I packed up and headed to the Jesuit tailgate.

I had a bite to eat at the Jesuit Tailgate. The Chappelles joined me. Checking on the car afterwards, it still wouldn't start..

I watched the painful fourth quarter of the JV game: lots of penalties and incomplete passes. The varsity came out fast and blew out Christian Brothers. Beau Bisharat scored on runs of 78, 71 and 21 yards in piling up 219 yards by halftime on seven carries. The Stanford-bound senior finished with a Holy Bowl record 315 yards on 16 carries. Jesuit won the game by the score of 51 to 9.

After the game, Jack bought me some jumper cables; Bridget had some in her car. I was eventually able to get someone to give me a jump. Although the traffic was backed up, I was able to sneak out the back way. People are sheep...